Conditions and Requirements for Central’s Operation of Johnson Lake 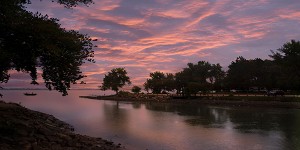 After completion in 1941, Johnson Lake served its intended purpose over the next several decades to regulate or re-time flows through two downstream hydroplants on The Central Nebraska Public Power and Irrigation District’s Supply Canal and to regulate flows into the Phelps and E67 Canal systems.

It still performs those functions, but – as they say – times change. Over the years, Johnson Lake’s location on Central’s system and growing demands for water for purposes other than irrigation and power generation, significantly changed and complicated the way Johnson Lake is managed. As a result, the lake’s water level tends to fluctuate with the variety of demands being placed on the lake.

The following information explains some of the conditions and requirements under which Johnson Lake is operated.

Central’s hydro-irrigation project operates under a license issued by the Federal Energy Regulatory Commission (FERC). The license requires specific operations, such as diversion and release requirements into and out of Central’s system, and cooperation with other agencies to manage river flows along the Platte River to improve habitat for endangered species. These license requirements affect operations of the entire Supply Canal system, including the associated lakes.

The Hydrocycling Agreement (Agreement) with the U.S. Fish and Wildlife Service (FWS) was initiated to improve conditions on the Platte River during endangered whooping cranes’ migratory seasons. The Agreement requires operations that reduce significant fluctuations in Platte River flows. Theoretically, smaller overnight stage changes on the Platte River would reduce the incidence of whooping cranes being forced from their river roost in the dark. The Agreement requires Central to ramp up the amount of water flowing through the J-2 Hydro in three steps, starting from no flow and increasing to 1,750 cubic feet per second. Each increase in flows is implemented between 5:00 and 10:00 a.m. on consecutive days.

Since the flow rate through the hydroplant changes from small to large amounts, Central must regulate the water in Johnson Lake. Typical hydrocycling operations cause Johnson Lake levels to fluctuate from 2 to 3 feet during each cycle. Each cycle starts when the lake is near the upper end of normal levels; the lake will then decline about 3 feet over a period of a few to several days. At this point, the cycle ends to allow the lake to rise before the onset of another cycle.

Hydrocycling operations take place each year from March 18 to Apr. 30 and from Oct. 17 to Nov. 10. These periods can be extended if whooping cranes are known to be near the Platte River.

The Flow Attenuation Plan, or “Spike-Flow Plan” (Plan), was developed with the FWS and the Nebraska Game and Parks Commission. It is intended to help attenuate (reduce) flows on the Platte River below the Overton measuring gauge during the least tern and piping plover nesting seasons.

To have 2,500 acre-feet of space in Johnson Lake to hold rain and rejected irrigation water, the lake must be kept at the lower end of normal levels. From June 1 to Aug. 15 each year, Johnson Lake will be operated near the low end of the normal operation range so that space is available if attenuation is required. When attenuating flows, Johnson Lake levels will increase until the water is released to the river at low flows or diverted to the irrigation canals. The water levels will then decline to the lower end of the operating range in preparation for another attenuation event.

The EA Bypass Agreement was developed to assist the Platte River Recovery Implementation Program (Program) and the FWS with Short-Duration, High-Flow (SDHF) events. (The Program developed from the Three-State/Dept. of the Interior Cooperative Agreement to protect endangered species along the Platte River.)

An aspect of this agreement that affects Supply Canal operations is an allocation of up to 6,000 acre-feet of regulating space in Johnson Lake that can be used by the Program to create higher river flows at Overton. The higher flows in the river will simulate “pulse” conditions in the river similar to historic high-water events. These events are designed to scour vegetation and create sandbars along the Platte River used by nesting endangered species. At the Program’s request, Central will lower Johnson Lake by up to 6,000 ac ft (around 3 feet in water level) during SDHF events.

Flows will be released from Johnson Lake at maximum capacities over a three-day period to generate high flows along the river. Lake levels may fall about 3 feet or less during each SDHF event, depending on the amount of water entering the lake. The current limit is 6,000 acre-feet of regulation space, but future studies may increase the available space for regulation. The lake will return to normal seasonal levels soon after a SDHF event.

The periods of planned SDHF events are from February through irrigation season, with March being the most likely time for most SDHF events. SDHF events are not currently intended to occur annually, but the possibility exists that they may become an annual event.

Johnson Lake is typically maintained at two seasonal levels: winter and all other seasons. Winter levels are typically lower than non winter levels to protect infrastructure from ice and to allow for unexpected outages or storm events. These levels are generally below most shoreline protection.

Lake levels are usually held within the normal operating range in the non-winter seasons. This varies with existing agreements and maintenance events. Spring levels are kept within the normal range until the start of the hydrocycling period. Once spring hydrocycling is completed, Johnson Lake is operated within normal ranges until June 1 when levels are adjusted to the lower end of the operating range. After Aug. 15, the lake is returned to normal levels until the preparations begin for the winter months.

Johnson Lake levels may also be affected by other factors. These factors may produce atypical operations, which includes the need for maintenance on canal structures, any of the three hydroplants, or the canal itself.

Sometimes these maintenance activities require the hydroplants to be taken off-line. Most routine outages last only one or two days, but some outages during which extensive work is performed may last a month or more. These extended outages require Central to regulate enough space in the reservoir above the hydroplant so that the reservoir can refill to normal levels during the outage and generation can resume after the outage ends.

The Supply Canal system, like most other manmade structures, can be vulnerable to the whims of nature. Disruptions caused by high winds, excessive rainfall, ice or other weather events may prevent distribution of power from Central’s hydroplants. This requires the hydropower plants to be shut off. Large precipitation events often produce high inflows into the Supply Canal system through runoff and indrains and can cause increases in water levels along the system. Cold weather creates ice along the Supply Canal that often limits the amount of water the canal can carry through some sections or reservoirs. All of these natural events can develop into unplanned disruptions of Supply Canal operations which must be handled on a case-by-case basis.

Cycling of the Hydropower Plants

Central’s hydroplants operate on efficiency curves. The hydroplants generate in an on/off cycle rather than at constant, non-efficient flow levels. This allows the most beneficial and efficient use of the water that “fuels” the hydroplants. Regulation of water along the system enables Central to operate efficiently and provide power to electrical customers when it is most needed.

As described earlier, the lakes and canal sections along the Supply Canal may be lowered to facilitate maintenance or repairs, or to conserve by using water already in the system to complete the irrigation season. Lowering of the canal system allows Central to minimize releases from Lake McConaughy and save water in Lake McConaughy.