As the public relations coordinator for The Central Nebraska Public Power and Irrigation District, I’ve led countless tours of the District’s hydro-irrigation project over the past 25 years. But unless my memory fails me – always a distinct possibility – I’ve never had the pleasure of hosting a group of high school students on a two-day tour.

That was the case on Oct. 6 and 7 when students from the Elwood High School science club participated in a tour. It was wonderful to have a group of kids who are so obviously invested in and serious about learning.

The Elwood Science Club is one of only three such clubs in Nebraska to gain certification by the American Chemistry Society. The club’s mission to motivate and encourage high school students to explore the many ways that chemistry is used in their everyday lives. It also provides hands-on opportunities for members to experience science beyond what is taught in the classroom; learn about career opportunities in the many and varied fields of science; provide service for the betterment of their community; and develop leadership and communication skills. 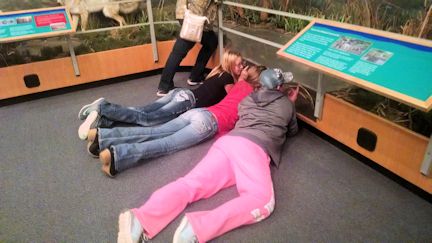 Members of the science club get an “under water” look at the fish and wildlife display in the Water Interpretive Center.

Led by science teacher Chelsey Neville, the students were enthusiastic about the tour and eager to learn more about water, hydroelectric power, wildlife and agriculture in Nebraska.

The first stop on the tour was at Elwood Reservoir, a site very familiar to most of the students because of its proximity to their home town. The group then traveled to a site along the E67 Canal to learn about the new telemetry project and automated weather stations that provide real-time data on-line to irrigation customers to improve water management. 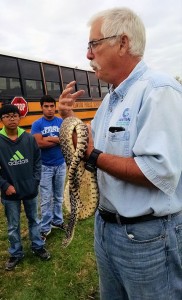 Biologist Mark Peyton competed with a big snake and a little puppy for the students’ attention.

The next stop was the Jeffrey Island wildlife management area where Senior Biologist Mark Peyton met the group. Peyton explained how the 3,000-acre tract of land in the middle of two channels of the Platte River is managed by Central as wildlife habitat. In addition to habitat work to benefit shorebirds, cranes, migratory song birds, reptiles and insects have been studied on the island, as have methods for controlling unwanted vegetation.

Peyton, perhaps mistakenly, brought a companion to the island: his nine-month-old Labrador puppy. In the competition for the students’ attention, Peyton probably came in second to the cute, bouncing bundle of energy named Luna, although he probably salvaged the day by pulling a four-foot-long bull snake out of a bag and allowing some of the more intrepid students to handle the reptile. 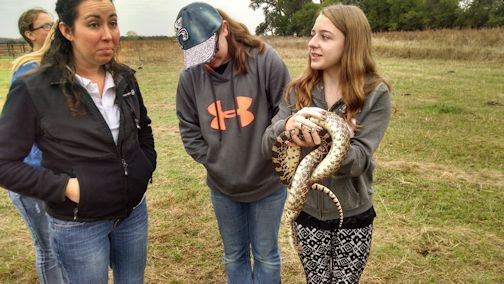 Teacher Chelsey Neville seems a little less enthused about the snake than one of her students.

Following a stop at the Johnson Lake inlet and E65 Canal head gate, the group enjoyed lunch in Gothenburg’s Country Barn & Grill and then visited the Gothenburg Control Center. Electrical Superintendent Devin Brundage discussed Central’s supervisory control and data acquisition (SCADA) system, explaining how technology has increased the efficiency of District hydropower and irrigation operations. He also complimented the students for their interest in science and encouraged them to pursue additional education and careers in fields related to science.

The next stop was Central’s diversion dam on the Platte River just east of the city of North Platte, followed by a visit to the Jeffrey Hydroplant where their tour guide was urged to save an unidentified species of snake (what is it with snakes showing up over and over?) from a watery grave in the hydroplant’s tailrace. The group then enjoyed an excellent catered dinner provided by the BBQ Company and John and Jenice Jordening of Lexington.

The group asked about rumors that Jeffrey Lodge was haunted by some long-dead and unknown spirit or spirits. Unfortunately, I could not confirm those rumors, which actually seem to have disappointed some of the students. I’ve stayed overnight at the lodge dozens of times and have never seen, heard, or felt anything out of the ordinary. But then again, I was apparently unable to dispel the rumors either. One of the boys claimed that he saw “a head or something” outside his bedroom window before turning in for the night. It was enough to make him sleep with some lights on.

See the “spectral image” in the upstairs window?* 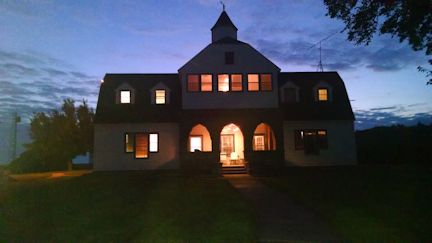 * It’s (probably) a reflection from the ceiling lights in the dining room. 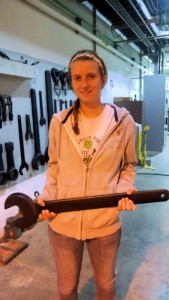 Ready to go to work at Kingsley Hydro.

On the next morning, after a quick breakfast, the group traveled to the Lake McConaughy Visitors and Water Interpretive Center where Kingsley Dam Foreman Nate Nielsen educated the students about operation of the dam and hydroplant. The walk out onto the reservoir’s huge control structures was a hit with the kids and the trip up and down several flights of stairs at the hydroplant did little to diminish their energy, apparently only whetting their appetites for lunch at Ole’s Big Game Steakhouse and Grill. Then it was back on the bus and back to Elwood High School where, as Mrs. Neville informed them, a quiz related to information learned over the past two days would await them in the near future.

Members of the class look down into the “Morning Glory” spillway.

That announcement drew a few groans, but I’ll be surprised if the students didn’t all “ace” the quiz.