Continuing a tradition that dates to the mid 1960s, students from the University of Nebraska-Lincoln College of Law recently toured Central’s hydro-irrigation project as part of an “Environmental Law and Water Resource Management Seminar.”

The tour is part of an interdisciplinary seminar with the Department of Civil Engineering.  Emphasis usually is placed on contemporary environmental issues and water resource management.

UNL law professor Anthony Schutz, a native of Elwood, Neb., has arranged for the tour in recent years.  This year he was accompanied by Brian Dunnigan, former NDNR director and now working for the engineering firm Olsson Associates, who is a guest lecturer for the seminar.

The students and their instructors traveled from Lincoln early in the morning to meet me at Central’s administrative headquarters in Holdrege for a brief preview of the project and a description of Central’s operations.  They then jumped back onto the motor coach and toured through several stops in the irrigated area, including sites that featured pivot turnouts from the canal, a sub-surface drip irrigation installation, an example of a “drop-span” pivot near Loomis, and a site in the E67 Canal area equipped with telemetry equipment (all 80-odd customer turnouts in the E67 area have such equipment) to provide customers with near real-time water delivery and evapotranspiration data.

After a trip across the Johnson Lake Dam, a stop at the lake’s inlet and a peek at the new head gate on the E65 Canal, the group headed for lunch at the Gothenburg Barn and Grill.  The bus then headed for the Gothenburg Control Center where Gothenburg Division Manager Devin Brundage explained the control center’s function and provided more detail about generation at Central’s hydroelectric plants.

From Gothenburg, the bus headed to North Platte where Kent Miller, manager of the Twin Platte Natural Resources District, briefed the students about the NRD’s functions and current projects, including participation in the NCORPE river augmentation project.

Then it was on to Jeffrey Lodge at Jeffrey Lake where the group enjoyed a catered dinner followed by a discussion with three attorneys from the area. 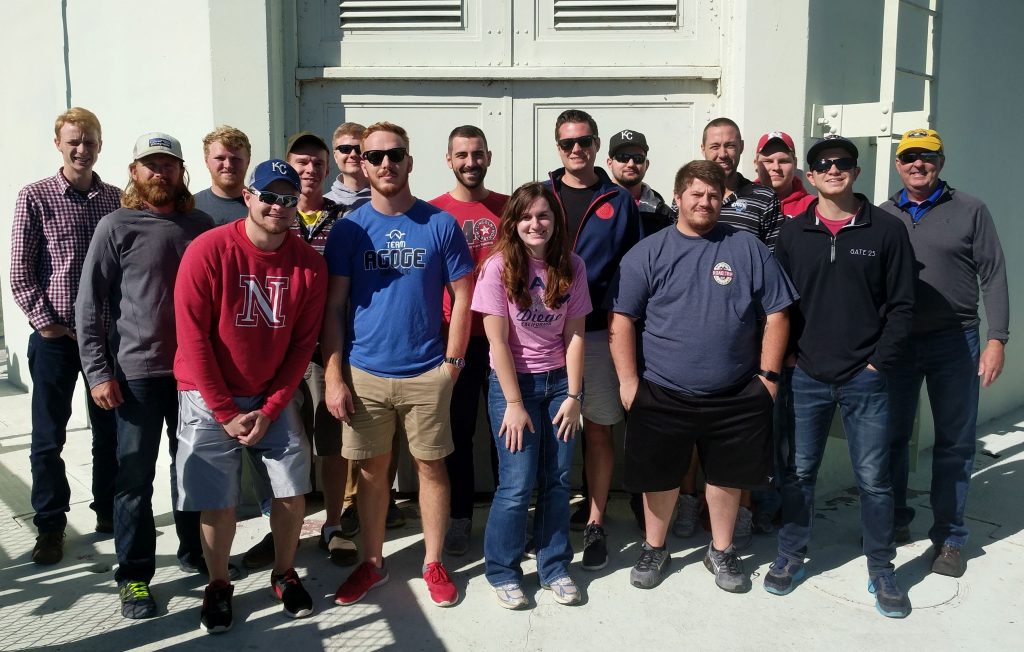 The 2017 UNL Engineering/Law Student Tour group stands for a photo in the shadow of the Outlet Tower at Lake McConaughy. Law Professor Anthony Schutz is second from left, and Brian Dunnigan, guest lecturer, is at far right.

This year, rather than discussing water law, the focus was on a different legal issue.  Retired attorney and Gosper County Judge Carlton Clark, current Gosper County Judge Todd Wilson and Bronson (B.J.) Malcom, an attorney in Cozad, spoke to the law students about giving some thought to practicing law in rural Nebraska.  Attorneys in some rural Nebraska counties can be pretty sparse on the ground, which provides an opportunity for young lawyers to get started in their profession, practice in a variety of legal proceedings, and fill a need that currently exists outside of Nebraska’s metropolitan areas.

The next morning, after a continental breakfast at the lodge, the group headed to Kingsley Dam and Lake McConaughy.

The students had an opportunity to browse through the Water Interpretive Center at the Lake McConaughy Visitors Center and watched a 20-minute video featuring an actor portrayal of the late, great Sen. George Norris in which he explains the importance of water within the Platte River Basin.

Tom Hayden, supervisor of NDNR’s West Field Office Operations in Bridgeport, Neb., was a special guest speaker on the tour, explaining to the students the complicated world of water administration in Nebraska.  I could almost see the students’ heads spinning as Tom related stories of administering flows in the Platte River.  His job has become ever more complicated as demands for water increase from every direction (environmental account flows, instream flow appropriations, excess flow calculations, special water legislation, etc.). 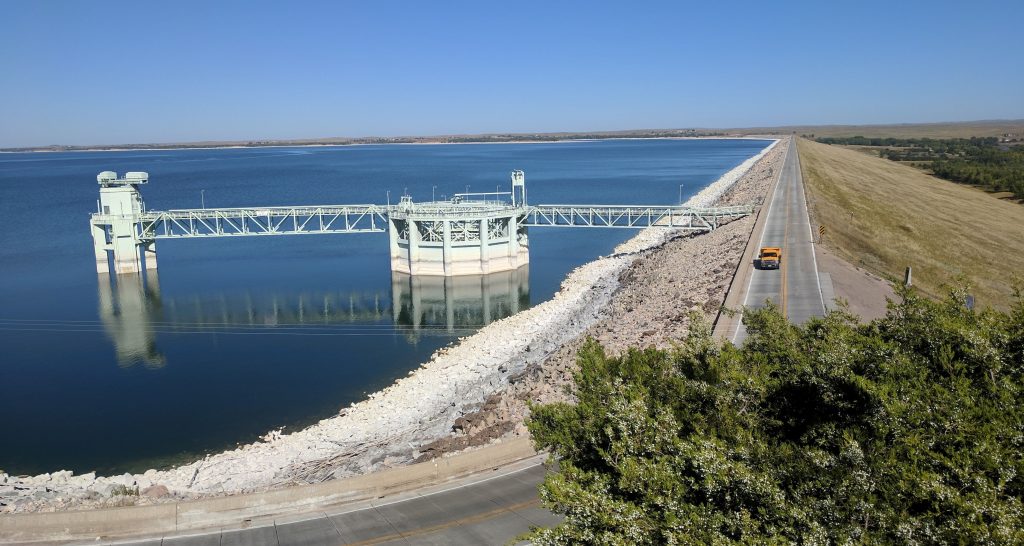 The outlet structures and Kingsley Dam photographed from the “Hilltop” on Day 2 of the tour. As you can see by the blue skies and placid water of Lake McConaughy, it was a beautiful day for a tour.

After Hayden’s presentation, the group visited the outlet structures for Lake McConaughy (the outlet tower and the “Morning Glory” spillway), pausing for the group picture that accompanies this story.  The next stop was the “physical exercise” portion of the tour:  the trip down and back up several flights of stairs to explore the inner workings of the Kingsley Hydroplant courtesy of Kingsley Dam Foreman Nate Nielsen.

Finally, having worked up sufficient appetites, the students boarded the bus for a short ride to Ole’s Big Game Bar and Grill at Paxton where Central treated them to a lunch of buffalo burgers before sending them back to their studies in Lincoln.  Good luck on the quiz over what you learned while on tour!

Research of the District’s archives indicates that the first law school tour of Central’s project took place in March of 1964.  Professors Richard Harnsberger and John Gradwohl shepherded the first class of law students on the three-day project tour.  District personnel conducting the tour included Don Long, assistant to the general manager; Bernard Donelan, manager of the Kingsley Division; and Ralph Knepper, hydraulic engineer.  Evenings were spent at Jeffrey Lodge discussing legal aspects of the project and water law issues with Ralph Canaday, who was Central’s chief legal counsel from the first years of the District’s formation until his retirement in 1959.  Canaday remained active with the District as a consultant for several years after his retirement. 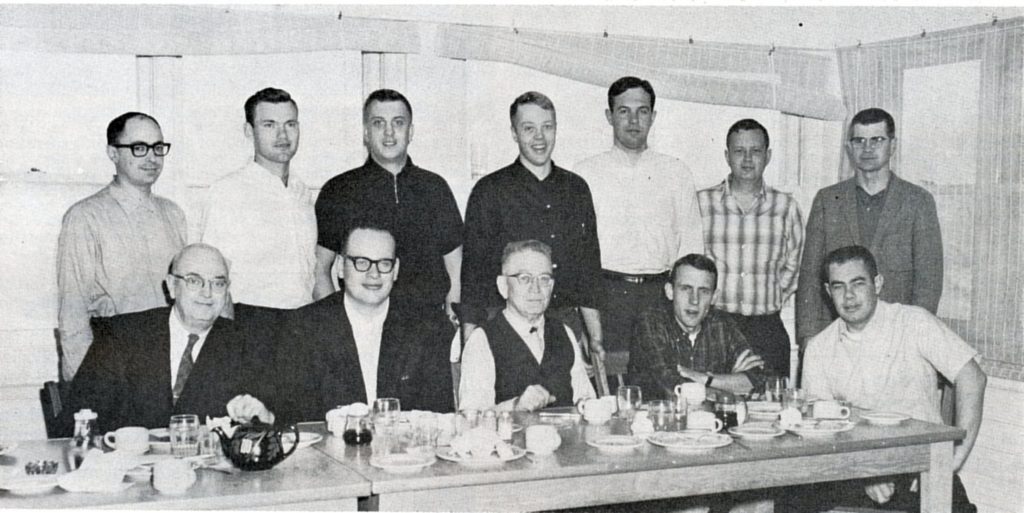 The water law tour has been going on ever since, with but a few interruptions caused by weather or scheduling conflicts.  Over the years, the focus of the seminar evolved from just water law and future attorneys to include graduate students from UNL’s engineering college.  Professor Ralph Marlette was instrumental in involving students from the Department of Civil Engineering in the tour.  Harnsberger and Marlette led the tours for through the 1970s and ‘80s until retiring and handing off the seminar to Law Professor Norm Thorson, and a series of civil engineering professors, including John Stansbury and Rollin Hotchkiss.

Later, former NDNR director and civil engineer Mike Jess, who was a guest lecturer for the seminar and also was once an engineering student on the tour in the 1960s, helped conduct the tours for several years.  Ann Bleed, also a former NDNR director, succeeded Jess and this year the tour welcomed yet another former NDNR director, Brian Dunnigan.  Sandra Zellmer, a UNL law professor with an impressive background in water and natural resources law has also filled in occasionally during the tour.

A feature that was added – or returned — to the tour within the past decade was the after-dinner discussion with practicing attorneys about water law.  Mike Klein, Central’s long-time legal counsel, and Judge James Doyle, now a District Court Judge, but formerly the legal counsel for some Natural Resources Districts, have led lively and entertaining discussions about various legal aspects, court cases and administrative actions involving Nebraska’s water resources.