When people in Nebraska think about the state’s wildlife resources, clams don’t generally come to mind. Clams are creatures that are normally associated with oceans, large rivers and big lakes, features for which Nebraska isn’t particularly known. However, the state does harbor a fairly diverse collection of freshwater mussels, one of the many names for the creatures we think of as clams (other names are bivalve and naiad).

Places you can find various kinds of mussels include the upper stretches of irrigation canals and the lakes of the Central District’s Supply Canal system. A 1994 study conducted by Central’s Mark Peyton and Jay Maher identified more than 8,000 specimens of mussels in seven irrigation canals and ten lakes. Mussels from ten different species were found among the 8,000 specimens.

Large numbers of mussels were located in Johnson Lake, Midway Lake, Jeffrey Lake and Lake Maloney. Less extensive, but far denser beds were found in irrigation canals like the Phelps County Canal near Lexington and the 30-Mile-Canal near Brady. 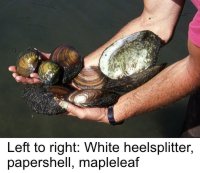 Some people have contended that the absence of large and diverse populations of mussels in the Platte River is an indication that the river’s ecosystem is declining. However, the Peyton/Maher study concluded that the Platte is not now, nor has it ever been a quality habitat for freshwater mussels. This conclusion is based on the fact that few historical records of mussels in the Platte are available. The shifting, sandy bottom of the river is far from conducive to mussels, the “boom-and-bust” nature of the river (prior to development, the river often carried 10,000 to more than 20,000 cubic feet per second of water during May and June and then dried up completely in August), and the absence of abundant populations of the kinds of fish that are required for the clams’ parasitic larval stage.

In many species of clams, the larvae stage must feed on the blood from fish. Not any fish will do. Like so many parasites, different species of clams require different hosts. For example, white heelsplitters were the most common mussel found in the study. They were common in virtually all the irrigation canals and lakes, however, only two small specimens were found in the Platte. This species parasitizes the common carp, green sunfish, white crappie and largemouth bass. All of these fish are present in the Platte River, but — with the exception of carp — they are not overly common. Other fish which act as hosts for a variety of different species of clams are yellow perch, freshwater drum and flathead catfish. 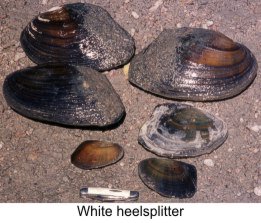 Elsewhere in the nation, freshwater mussels are one of the most frequent additions to the threatened and endangered species lists in recent years. The decline in mussel populations in other parts of the country is largely a result of activities such as dredging and channeling of river beds, pollution and impacts from exotic species such as the Asiatic clam and zebra mussel (not yet found in Nebraska, although Central and many other agencies are monitoring for this potentially harmful species). While no evidence presently identifies any activities or conditions detrimental to the populations of the upper and central Platte River Valley, Central will continue to monitor and study these populations as part of the various environmental tasks associated with expected licensing conditions.

More information about Platte River mussels and the Peyton and Maher study can be found in the Transactions of the Nebraska Academy of Sciences, Volume #22, 1995. Pages 43-48.