While much of the western United States suffered from a long-term drought (see the end-of-September drought map), Nebraska – and perhaps Lake McConaughy – fared a bit better.

Typically, the months of October and November see the highest inflow totals to Lake McConaughy, but last year’s total for those two months amounted to only 79% of normal.  Spring (March-May) inflows were only 69% of normal.  As a result, the reservoir peaked on June 5 at elevation 3,250.9 feet, about 14 feet below capacity.  It reached its low elevation for the year in early September at 3,235.4 feet, a drawdown of 15.5 feet.

It should be noted that releases from the Environmental Account (a block of water managed by the U.S. Fish and Wildlife Service to benefit wildlife habitat along the river) from mid-May through June contributed to the drawdown, as did releases for several irrigation canals along the North Platte and Platte Rivers operated by entities other than Central. 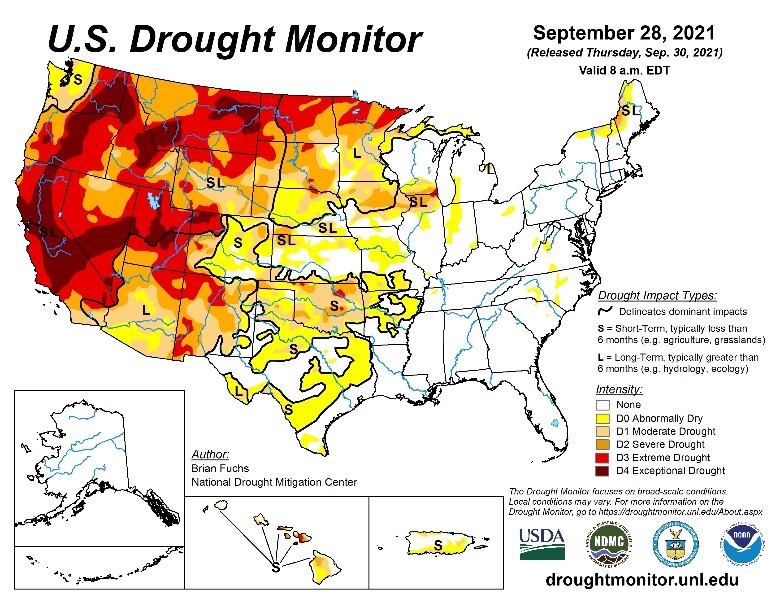 For those who subscribe to the “glass half full” attitude, despite the combined demands, releases during the water year were only 80% of the historic median and 90% of the 30-year median.  Also, much of the irrigated area served by Central benefitted from rainfall that was slightly above normal during the growing season, despite some stretches of hot, dry weather.

And the fact that the reservoir only declined by 15.5 feet given the scarcity of inflows – and little contribution from the South Platte River, water from which can be used to reduce releases from Lake McConaughy – is testament to the tremendous gains in producers’ on-farm irrigation efficiency, as well as efforts by Central to improve its conveyance system over the years.

With meteorologists predicting a second year of a La Niña weather pattern (a natural ocean-atmospheric condition marked by cooler-than-average sea surface temperatures across the central and eastern Pacific Ocean near the equator that impacts weather across the world), what does that mean for snowpack development in the Upper Platte Basin this fall and winter?

According to the National Oceanic and Atmospheric Administration’s Climate Prediction Center, the central Rocky Mountains will likely see continued dry conditions this winter with equal chances of below-, near- or above average temperatures, while Nebraska’s winter has equal chances for below-, near- or above-average precipitation and temperatures.

In other words, we’ll just have to wait and see.