Predicting the future water level at Lake McConaughy is not an easy task and many variables are at play when trying to determine where the elevation may end up at the end of the summer.

Average inflows into Lake McConaughy are generally over 2,000 cubic feet per second (cfs) in the month of June with the median average at 1,500 cfs.  This year from June 1 through July 1 the average inflow was only 243 cfs.

Irrigation demand has increased towards the end of June and with lower than normal inflows, the water level is falling at a greater than normal rate.

Civil Engineer Tyler Thulin says Lake McConaughy typically drops approximately 15 feet from peak spring elevation until early September.  He foresees that drop to be higher than average this summer with a drop of between 15-20 feet. This could easily vary a couple of feet if inflows into the lake change. 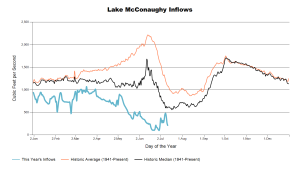