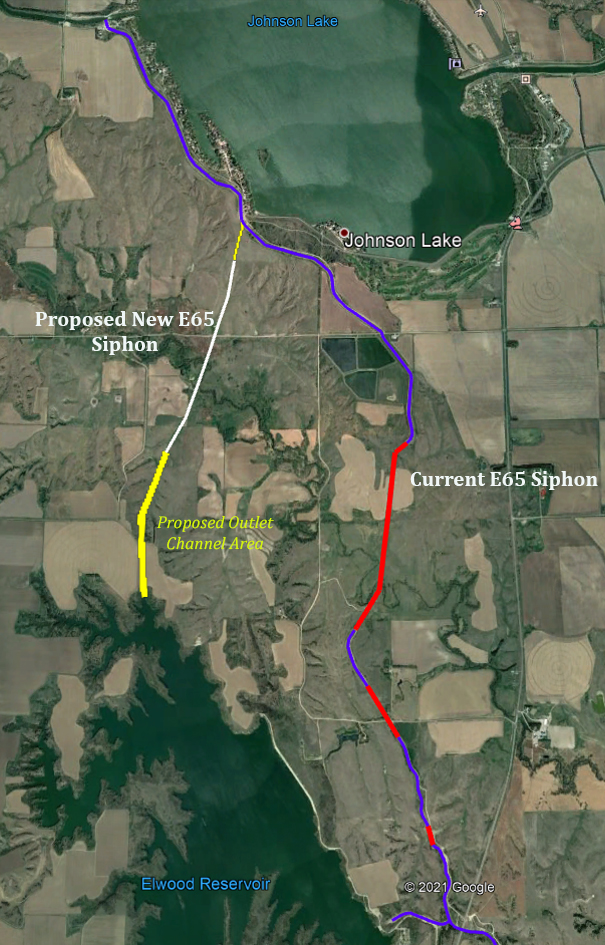 A major project to replace the 80-year old critical infrastructure serving 42,000 acres and Elwood Reservoir is on the drawing board.

Currently 7,250 feet of steel pipe make up the E65 siphons.  Over the years they have needed numerous costly repairs, occasionally don’t meet the capacity of irrigation demands and require pumping water into the Elwood Reservoir.

In the new plan, 5,500 feet of new canal and 5,800 feet of buried plastic pipe would be installed.  This would enable water to flow into Elwood Reservoir, eliminating the need for and cost of pumping water.

The new pipeline would have a greater capacity than the existing siphons (just over 400 cfs).  Completion of the project helps ensure uninterrupted delivery of water to the 42,000 irrigated acres along the E65 Canal system in the future.  Another benefit to the project is the potential for additional recharge and water conservation.

Design details are still being finalized, but the preliminary cost estimate for the project is between $14 and $17 million.  Central submitted an application for a grant from the Nebraska Water Sustainability Fund, which could pay for up to 60% of the project.  Applications for the grant were due at the end of July with selections being made by the end of the year.  The prospects for the project are yet to be determined if funding is not awarded by the WSF.