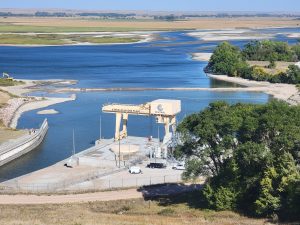 In coordination with the Nebraska Public Power District (NPPD), Central began draining Lake Ogallala in late September to allow NPPD to complete maintenance on the Keystone Diversion Dam as well as other canal maintenance projects.

Beginning on Sept. 22, no water has been released from Lake McConaughy through Kingsley Dam into Lake Ogallala.  The project is expected to last until late November, resulting in nearly two months of no water being released out of Lake McConaughy. While the lake is drained, crews will be reapplying a protective coating to the gates on the south side of the Keystone Diversion Dam, which helps regulate the amount of water released from Lake Ogallala into the North Platte River.

To prepare for the construction, Central built a dike near the Kingsley Dam to protect the infrastructure of the Kingsley Hydroplant.