Irrigation Season Ready to Kick Off 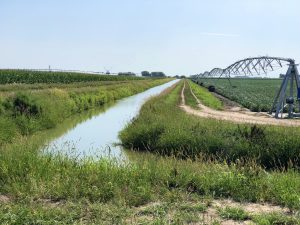 April 15th marked the official start of irrigation season with water beginning to be pushed down the supply canal.  Pivot irrigation use continues to be on the rise within the district.  For the 2021 irrigation season, 669 pivots are registered, up 30 units from the previous irrigation season accounting for 60 percent of total acres served.  Pivot systems are beneficial for both Central and the water user as the user has opportunity to apply water to crops more efficiently and generally has higher crop yields due to improved uniformity of water application..

Civil engineer Tyler Thulin noted that Lake McConaughy is at around 75 percent of capacity heading into the start of irrigation season.  This level is slightly lower than the past several years.  Water will only be released from the lake for irrigation use, not for hydro power production.