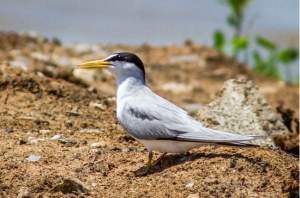 The interior least tern, the smallest member of the gull family, is one of the species of birds that share the beaches of Lake McConaughy and sand bars of the Platte River system in Nebraska with hikers, campers and outdoor enthusiasts.  Since 1985, it had been threatened with extinction.

Good news occurred recently when the bird was removed from the federal endangered species list (it remains on Nebraska’s list).  With continued research and habitat protection, which Central has done at Lake McConaughy and other sites, the interior least tern’s future is bright.  State laws protective of native wildlife continue to apply to the interior least tern.