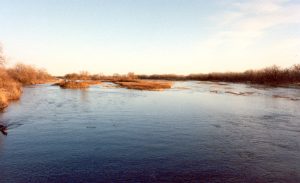 With releases from the Environmental Account ending on June 24, it is an appropriate time to refresh readers’ memories about the purpose and management of the account.

The Environmental Account (EA) is a “block of water” set aside in Lake McConaughy to supplement flows in the Platte River. Water is added to the EA and stored in Lake McConaughy until the water is needed downstream. Water released from the account is tracked and protected by Nebraska water law so that the water may provide beneficial instream flows for endangered species.

The June releases provided a flow of at least 1,500 cubic feet per second at the Platte River gauge at Grand Island, while remaining below the National Weather Service’s flood stage at the North Platte gauge. The flows were intended to maintain and enhance the wide, open, unvegetated and braided channel of the central Platte River by inundating sandbars to prevent vegetation establishment. This was the only EA release currently planned for the 2022 calendar year.

The Central Nebraska Public Power District (Central) and the Nebraska Public Power District (NPPD) have five hydropower plants in the Platte River basin that require licenses from the Federal Energy Regulatory Commission (FERC). Central and NPPD received new FERC licenses in 1998 after the original licenses expired. The establishment of the EA is a requirement in these new licenses to address threatened and endangered species issues related to Central and NPPD operations.

How is the Environmental Account related to the Cooperative Agreement?

The Environmental Account is an important part of the Platte River Cooperative Agreement.  Governors of Nebraska, Wyoming and Colorado and the Secretary of the Interior signed the Cooperative Agreement in 1997 to address the needs of four threatened and endangered species using the Platte River by developing a Recovery Implementation Program (Program).

One of the goals of the proposed Program is to improve habitat for endangered species along the central Platte River by re-timing or adding water to the river.  The EA in Nebraska, along with a Pathfinder Dam modification project in Wyoming and the Tamarack groundwater recharge project in Colorado, provide about half of the needed amount while the rest comes from other water supply projects or water conservation programs.

The quantity of water available in the Environmental Account varies according to how much has been added and how much has been used. Central contributes ten percent of the storable inflow to Lake McConaughy during the non-irrigation season (October through April). The amount of water contributed in this manner may never exceed 100,000 acre-feet per year. It is also possible for water to be contributed from other projects, such as the transfer of environmental water from Pathfinder Reservoir as mentioned earlier. Any water not used at the end of the year may be carried over to the next year.

In addition to regular contributions and releases, other rules or adjustments apply to the EA. First, the EA may never exceed 200,000 acre-feet, regardless of contributions or carryover. In addition, any time Lake McConaughy fills to capacity, the EA is automatically set to 100,000 acre-feet. Finally, the EA is subject to evaporation and seepage losses in Lake McConaughy in proportion to the amount of water in storage. 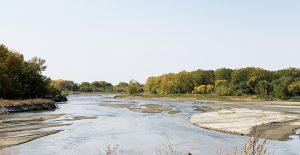 The EA manager is an employee of the U.S. Fish and Wildlife Service and is responsible for requesting releases of water from the EA. Each year the EA manager is required to develop a plan describing the intended use of the EA throughout the year.  The daily operations are coordinated among the EA manager, Central, NPPD, and the Nebraska Department of Natural Resources (NDNR).

Once the water is released, it is tracked downstream and protected by a Nebraska water right as instream flow for the central Platte River. EA water is assessed “transit losses” for evaporation and seepage along the way according to NDNR accounting procedures.

There are certain conditions that apply to the use of EA water. The most significant rule is that the EA manager may not request releases of water that will cause or add to out-of-bank flooding along the river. Another condition is that EA water may be diverted through hydropower facilities, as long as the water is returned to the river.