The boards of directors of the Central Nebraska Public Power and Irrigation District and Dawson Public Power District voted during a joint meeting of the boards on Oct. 24 to consolidate the two 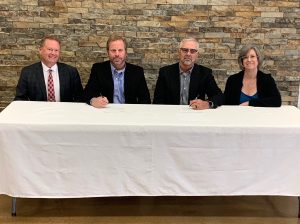 districts into a single public power and irrigation district. The consolidated entity will be called Platte River Public Power and Irrigation District (PRPPID).  Central’s board voted 9-2 in favor of the consolidation and Dawson’s vote was 7-4 in favor.

The formation of PRPPID brings together complimentary operational focuses of retail electrical distribution, renewable power generation and irrigation water distribution. Bringing them together in a single entity under a shared governance and administrative structure will further maximize this fit. This ensures that hydropower — and other potential future electrical generation technologies — can directly benefit the area’s irrigation delivery service customers and its retail electrical customers, the owners of this public entity.

“The directors should be applauded for their vision and ability to work in the best interests of all stakeholders,” said Pat Hecox, Dawson PPD’s board president.

Dave Rowe, president of Central’s board of directors, said, “The unique operational portfolio that results from the consolidation ensures that we are involved in initiatives that enhance economic development built on the foundation of two of Nebraska’s most vital resources: water and power. This will strengthen our area and offer advantages that will increase in the future, just as those who built these districts envisioned.”

The new district will align hydropower generation during the irrigation season with peak demands for power, maximizing the value of the water used by its irrigation customers while providing reliable energy for groundwater irrigators with electric pumps, agricultural industries and homes. As a single entity, PRPPID will be uniquely positioned to conjunctively manage these resources to benefit surface and ground water irrigators, energy customers, recreationalists and other stakeholders ultimately improving the sustainability of surface water supplies.

Gwen Kautz, Dawson PPD’s general manager, said, “Two years of detailed research have gone into this endeavor. The data, the synergies and the commitment to making central Nebraska stronger are all there.”

“Equally important was the dedication of our department managers to make sure we dotted our i’s and crossed our t’s throughout this process.  (continued on page 2)

“They work in this industry daily, can see the challenges ahead and knew we would handle them better together. We know there is much more work ahead and pledge to pursue it with the same commitment that led up to this historic decision.”

Devin Brundage, Central’s general manager, said, “How these resources and assets are leveraged to benefit us, and future generations, will be decided here in south-central Nebraska by those who have a real stake in them. Through providing benefits of low cost, sustainable irrigation deliveries in conjunction with low-cost, reliable electrical power and groundwater recharge, the Platte River Public Power and Irrigation District will positively influence virtually every part of daily life in this part of the state.”

As the final step in the process, the board-ratified consolidation plan was submitted to the Nebraska Power Review Board. The NPRB will review the plan and hold a hearing at its meeting in Lincoln on Dec. 16. Pending approval from the Power Review Board, it is estimated the new public power and irrigation district will officially come into being in July 2023.