On July 1, 1997 the Governors of Nebraska, Wyoming, and Colorado and the Secretary of the Interior signed the “Cooperative Agreement for Platte River Research and Other Efforts Relating to Endangered Species Habitat Along the Central Platte River, Nebraska.” Since that time, a Governance Committee, with representatives from the three states, federal government, environmental organizations, and water users, has been developing the Platte River Recovery Implementation Program (Program). When implemented, the Program would manage certain land and water resources following the principles of adaptive management to provide benefits for four federally threatened or endangered species in Nebraska. It is intended to provide Endangered Species Act (ESA) compliance for water users in the Platte River basin upstream of the confluence of the Loup River with the Platte River (the Loup River confluence) for effects to these listed species.

On January 22, 2004, the U.S. Bureau of Reclamation (USBR) released the Draft Programmatic Environmental Impact Statement (DEIS) analyzing the draft Platte River Recovery Implementation Program. Since that time, the Governance Committee has been working to address public comments and issues identified in the DEIS and to complete the remaining portions of the Program. Currently, the U.S. Department of Interior anticipates releasing the Final EIS in the spring of 2006. Soon after the release of the FEIS, the Biological Opinion (BO) will be completed by the U.S. Fish and Wildlife Service and the Department of the Interior will issue its Record of Decision (ROD). If the Program is acceptable to the Secretary and the Governors of the three states, they will each sign a Program Agreement. Under the current schedule the Program would be implemented on October 1, 2006. 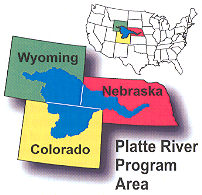 As proposed, the Program would be a basin-wide effort undertaken by the Department of the Interior (DOI) and the States of Colorado, Nebraska and Wyoming to provide benefits for the endangered interior least tern, whooping crane, and pallid sturgeon and the threatened piping plover (the target species). Through the Program, the states and the federal government would provide land, water, and scientific monitoring and research to evaluate Program benefits for the target species. The Program would be incremental with the First Increment designated for 13 years. Implementation of this Program would be through a Governance Committee consisting of representatives of the three states, DOI, water users, and environmental groups.

The purpose of the Program is to implement certain aspects of the U.S. Fish and Wildlife Service’s recovery plans for the target species that relate to the associated habitats by securing defined benefits for the target species and their associated habitats. It also is to provide ESA compliance for existing and certain new water related activities in the Platte River basin upstream of the Loup River confluence for effects to the target species, help prevent the need to list more basin associated species pursuant to the ESA, mitigate the adverse impacts of certain new water related activities through approved depletions plans, and establish and maintain an organizational structure that will ensure appropriate state and federal government and stakeholder involvement in the Program. 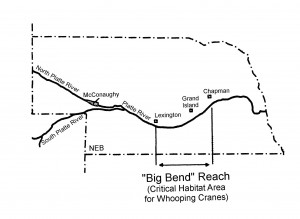 The Program has three main elements: (1) increasing streamflows in the central Platte River during relevant time periods through retiming and water conservation/supply projects; (2) enhancing, restoring and protecting habitat lands for the target bird species; and (3) accommodating certain new water related activities. The Program will achieve these elements through an adaptive management approach employing scientific monitoring and research to evaluate the management actions and species habitat needs. These elements will be implemented according to underlying principles that require interests in land to be acquired only from willing participants and avoid increasing tax burdens to local citizens by paying taxes or their equivalent on Program lands. Program lands will be held by a land holding entity (rather than by the federal or state governments) and will be managed under a “good neighbor” policy.

The Program’s long-term objective for water is to provide sufficient water to and through the central Platte River habitat area to assist in improving and maintaining habitat for the target species using incentive based water projects. During the First Increment (13 years) the Program’s objective is to retime and improve flows in the central Platte River to reduce shortages to target flows by an average of 130,000 to 150,000 acre-feet per year at Grand Island.

During the First Increment the Program’s objective is to protect, restore, and maintain 10,000 acres of habitat. The Program’s long-term objective for land is to acquire land interests, restore where appropriate, and maintain and manage approximately 29,000 acres of suitable habitat along the central Platte River between Lexington and Chapman, Nebraska. Land acquired during the Program’s First Increment will be credited to this long-term objective as will certain lands that meet criteria established by the Governance Committee but are managed by other entities such as environmental organizations or utility and irrigation districts.

One of the Program’s purposes is to mitigate the adverse impacts of certain new water related activities through the implementation of state and federal depletions plans. This will allow continued growth and water development to occur in the Platte River basin along with improving conditions for the target species. 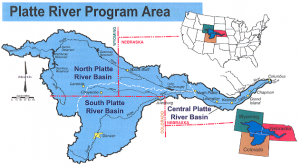