From the Archives: “This Day in History”

Kingsley Dam was completed in 1941, so as we approach in 2016 the 75th anniversary of the dam and the beginning of project operations, we will be posting a list of historical highlights from the District’s past, sort of a “This Day in History” compilation. The entries will added according to when they occurred over the calendar year.

April 11, 1941 — George Johnson, Central’s chief engineer and general manager, predicted that the Platte River would have a steady year-round flow within three years.  The construction of Kingsley Dam and Lake McConaughy, which would store flows in the North Platte River for irrigation deliveries and hydroelectric generation, would eliminate the “no-flow” periods — particularly in the central Platte stretch — that were common before the dam was built.  (Subsequent history would prove Johnson largely correct.)  The canal system — including the Supply Canal and the irrigation canals — would eventually contribute underground return flows helped stabilize base flows in the river.

Nov. 7, 1940 – Central’s board of directors signed a farm management contract with the University of Nebraska, placing what was called the Tri-County Farm Management Farm (which was used to demonstrate best management practices to farmers still learning about irrigated farming) under the supervision of the University’s Board of Regents.

November, 1940 — The two dredges pumping fill for Kingsley Dam — one upstream and one below the dam — completed the project that built (at the time, behind Ft. Peck Dam on the Missouri River in Montana) the second largest hydraulic-fill dam in the world.  Approximately 25.5 million cubic yards of sand and gravel were pumped during the process.  Following completion of dredging activities, workers plugged the huge tube that carries water from the North Platte River beneath the dam (now connected to the Morning Glory Spillway) and water began passing through the Control Tower.  The process of filling the reservoir was expected to begin in the spring of 1941.

November, 1965 – Central crews, under the supervision of Kingsley Dam Division Manager Bernard Donelan, finished what was originally planned to be a three-year project of placing 800-lbs. tetrahedrons on the face of Kingsley Dam. The 16,360 “tets” were placed in a matter of months because the growing season proved to be wet, resulting in low demand for water from Lake McConaughy and freeing up members of the crew to work on the dam instead of their normal irrigation-related duties. A private contractor poured the concrete jackstones at a site near the dam and subsequently manufactured several thousand more to stockpile near the dam. The jackstones were designed to protect the dam’s face by breaking wave action against the dam.

November 2004 – Maps prepared from data accumulated by the UNL Conservation and Survey Division revealed, “Significant and persistent declines in some areas of the state (that) have only become more obvious in the last few years due mainly to current drought conditions and resulting increases in groundwater pumping.” The UNL Water Center noted a spike in well drilling that occurred after passage in the spring of LB962 (a law intended to prevent conflicts between groundwater and surface water users) that spurred a rush to drill additional wells before a moratorium on new wells in some areas went into effect. According to UNL hydrogeologist Jim Goeke, “The increase in pumping and diminished recharge to the aquifer due to drought disrupts groundwater flow to streams, delaying or diminishing the flow of surface water in many basins.”

November 2009 – After 25 years and generation of almost 2 million megawatt-hours of electricity, the Kingsley Hydroplant finally required significant repairs and maintenance. Central crews began complete disassembly of the turbine-generator unit prior to repair of bushings in the turbine hub, cavitation repair on the turbine blades, refurbishment of wicket gates and oil seal improvements. The $4 million project was completed by March 2010.

Oct. 10, 1955 – Central’s board of directors and management announced plans to build a 100-megwatt power plant to be fueled by natural gas. The plant, which went on-line in 1958, was constructed adjacent to the Supply Canal southeast of Lexington, was named the Canaday Steam Plant after Ralph O. Canaday, who served as the District’s legal counsel during the formative years of efforts to bring an irrigation project to south-central Nebraska and later served as Central’s chief legal counsel and general manager.

Oct. 17, 1956 – During a drought in the mid-1950s, Lake McConaughy dropped to its lowest elevation on record since the reservoir’s initial fill. The lake’s elevation on this date was 3,198.2, with a volume of 348,900 acre-feet. At the time, the reservoir’s maximum capacity exceeded 1.9 million acre-feet, so the amount of water behind Kingsley Dam represented only 18.4 percent of capacity. The low-water mark would stand until September 2004 when the lake fell to an elevation of 3,197.6 feet during another extended drought. At that time, Lake McConaughy contained 341,400 acre-feet, or 19.6 percent of its current maximum capacity of 1,743,000 acre-feet. The reservoir’s maximum capacity was lowered in the early 1970s after a 1972 windstorm damaged the protective face of the dam.

Oct. 19, 1964 – A project began to replace an original – and somewhat iconic – structure along Central’s Supply Canal. The “High Bridge,” located on a county road over the canal south of Cozad was 219 feet long and stood 74 feet above the canal’s water surface was originally constructed in 1938 and was the highest bridge in the District. Age and wear-and-tear took its toll on the wooden bridge and it was replaced by a new bridge that stands 33 feet above the canal. 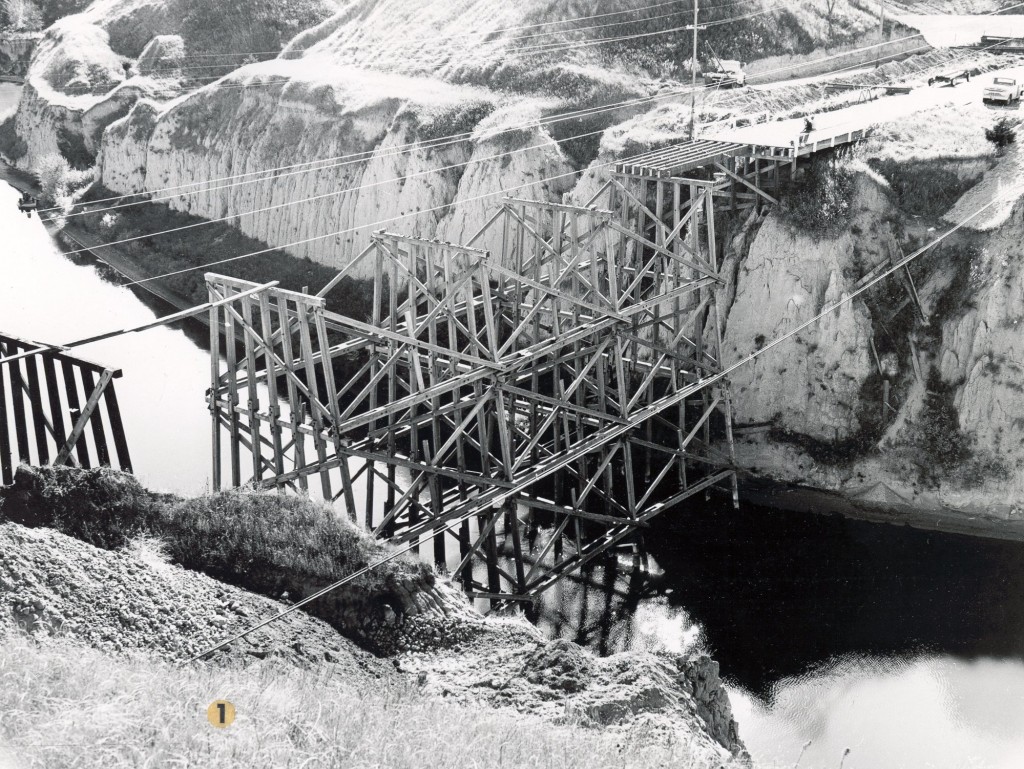 The original “high bridge” under construction over the Supply Canal south of Cozad. 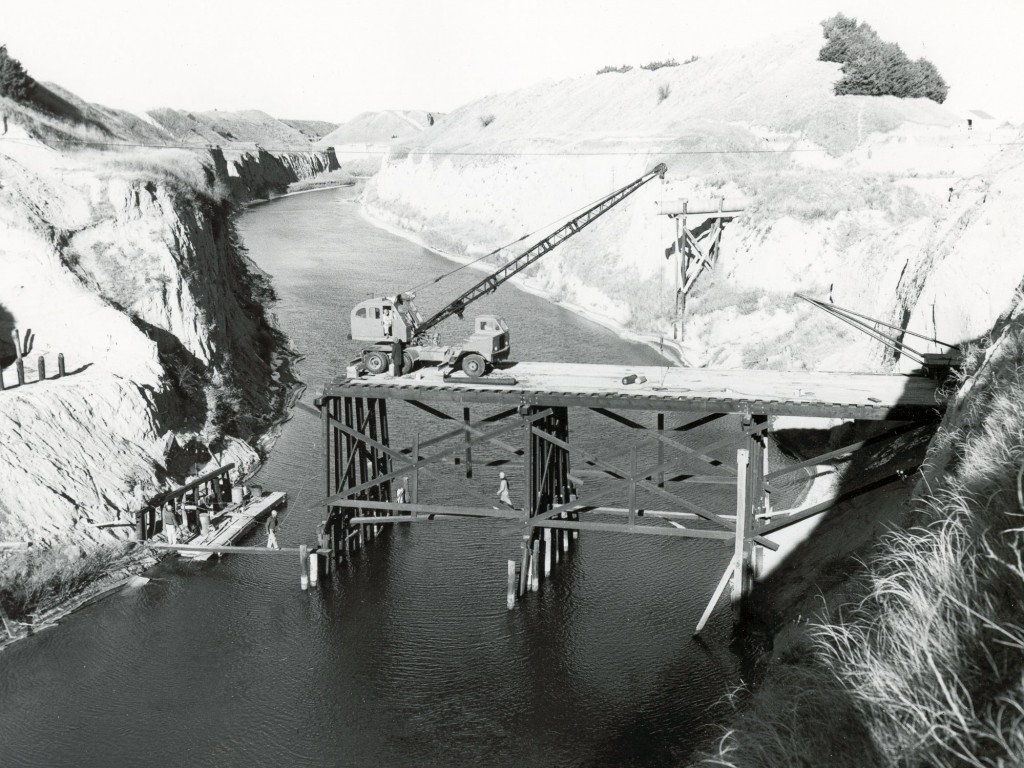 The replacement bridge under construction in 1964.

Oct. 26, 1990 – More than 800 people attended a “scoping hearing” at the Ogallala City Auditorium conducted by the Federal Energy Regulatory Commission in connection with the relicensing of Central’s (and the Nebraska Public Power District’s) hydroelectric project. More than 35 people testified during the five-hour meeting, almost all in favor of issuance of a new license with conditions that would not hinder provision of the many benefits from the project.

Oct. 27, 1997 – Central construction crews began an earthwork project to raise the head above a siphon on the E-65 Canal and to install more than 2,000 feet of synthetic membrane. The earthwork would provide six more feet of elevation above the siphon to increase the volume of water passing through the mile-long pipe. The membrane lining significantly reduces conveyance losses and prevents bank erosion along the E-65 Canal between the head gate near the Johnson Lake inlet and the siphon.