From the Archives: Electronic Equipment Will Monitor Supply Canal

The following article, republished from the August, 1964 edition of The Central Nebraska Irrigator, Central’s newsletter, tells about a rudimentary alarm system along Central’s Supply Canal, which was the precursor of today’s Supervisory Control and Data Acquisition (SCADA) system that monitors and controls water conveyance and hydroelectric generation throughout Central’s hydro-irrigation project.

The article was, in a way, clairvoyant. The writer may or may not have had some foreknowledge of what was to happen in the near future, but it also demonstrated that even in 1964, Central was ahead of its time.

Eight years after the article was written, the Gothenburg Control Center went into operation (in January, 1972) when remote supervisory control was established over the Diversion Dam, the Supply Canal’s hydroplants and control structures and the head gates of the irrigation canals. All are now monitored on computers at the Control Center by a supervisory control operator.

Control of Kingsley Hydro, NPPD’s Keystone Dam and the head gates of NPPD’s supply canal at the east end of Lake Ogallala were later added to the Control Center’s responsibilities because of the need for close coordination between the three components of the system to ensure proper flows into the canal and down river.

Communication is the key to such an automated system. The District has its own microwave system, supplemented by buried cable and VHF radio links. All information gathered at the remote terminal units (RTUs) is fed into the Control Center’s computers.

There are more than 1,800 alarm, control or telemetering points on the system which monitor and/or control functions of canal structures, pump stations, the three Supply Canal hydros and Kingsley Hydro.

The Control Center computer is programmed to receive data from the RTUs, check for alarm conditions and alert the operator to any abnormal readings. The operator’s control console includes a video screen that shows the current condition at any selected location on the system. Control functions are accomplished on a keyboard. The control room is manned around the clock every day of the year.

The automation enables Central to: 1) increase the generation of hydropower; 2) better manage the system under high-water conditions, i.e., sudden, heavy rain storms; 3) reduce the incidence of spills; 4) reduce maintenance needs on the canals as a result of better control of flows; and 5) reduce operating costs.

From The Central Nebraska Irrigator, July/August, 1964

Gothenburg Division personnel in charge of operating Central’s 75.6-mile-long Supply Canal are sleeping a little better these days as an alarm system has been installed that will automatically notify the operator on duty at Jeffrey Hydroplant of a high- or low-water situation at any of four locations along the canal.

Designed by Central’s Assistant Chief Engineer Ed Hamilton, the equipment was installed by the District’s electrical crew and members of the Gothenburg Division. The alarm systems have been installed at mile posts 5.1, 11.9, 31.2 and 35.9. These locations were considered as strategic or the most critical along the lengthy canal route. 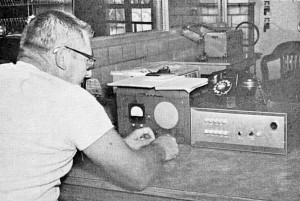 A water control gate is located at each of the four points and the alarms will tell the Jeffrey operator if water is high or low behind the gate or high or low below the gate.

The Jeffrey operator will also receive a visual and audio alarm should the power fail at any of the four locations.

The alarm equipment at the four canal sites includes electrodes and relays that are located in corrugated metal pipe wells upstream and downstream from the structure gates. These detect the high or low water levels. This equipment is connected to a radio transmitter with a tone encoder and timer that are mounted with a battery and battery charger as a power source.

When a high or low water level, or power failure occurs, the tone code is transmitted to the Jeffrey Power House by the radio transmitter and this code then switches on the proper light on a small panel at the power operator’s desk that indicates the location and type of trouble. A horn sounds at the same time.

The plant operator, hearing the horn, then checks the panel and determines by the light the location and type of trouble. He then silences the horn and contacts a canal patrolman or supervisor by phone and reports the trouble.

The four installations are the initial ones for the Supply Canal and it is expected that eight more locations will be included in the future.

A third phase in Central’s efforts to gain tight control of the Supply Canal will be automatic water recording equipment located at several points along the canal.

This equipment, by tone transmissions over the District’s Supply Canal telephone line, will give hourly readings of the canal water levels and gate openings.

The hydro plant operators will also be able to question this equipment at any time between the hourly readings.

When installed, the plant operator, after receiving a signal of high or low water conditions at any point on the canal, could then question the water recording equipment and find out exactly how high or low the water is. By questioning the water recorder at short intervals he could then determine if the trouble was of a temporary, self-correcting nature or if it is necessary to report the condition to a canal patrolman or his supervisor.

The information supplied by the alarm and recording equipment will give the Central District 24-hour coverage of its Supply Canal with instantaneous indications of canal trouble such as flooding from heavy rains, leaks or malfunctioning gates.

As the District gains more experience in the installation and operation of such electronic equipment, it is anticipated that similar systems will be worked into the hundreds of miles of irrigation canals owned and operated by the District.