A group from the Robert B. Daugherty Water for Food Institute (DWFI) visited sites within Central’s irrigation service area on Aug. 18 as part of a workshop aimed at “Understanding the Water-Energy-Food Nexus for Irrigated Agriculture.”

After a catered lunch at Central’s headquarters in Holdrege, the group stopped at a subsurface drip irrigation site near Loomis. The SDI system was installed several years ago as a demonstration project to investigate the use of water delivered from Central’s canal system through buried drip tape on an 8-acre pivot corner. Over the years, crop yields from the acres irrigated by the SDI system have regularly matched or exceeded yields obtained from acres irrigated under the adjacent pivot, while the volume of water has been significantly less than applied by the pivot.

The next stop was at a soybean field where the producer installed a drop-span pivot to enable irrigation of approximately 23 acres that could not be covered by a normal pivot because of obstructions. The system can use either surface water from Central’s canal, or groundwater from a well, although the well has been used sparingly recently. The pivot uses GPS control to automatically stop at the desired point to allow the producer to either disconnect or connect (depending upon which way the pivot is traveling) the drop spans to continue its path through the field.

Central Valley Irrigation representatives from Holdrege, including owner Monte Vonasek and employees Project Manager Jeremiah Johnson and Coordinator Design Manager David Hoferer, were on hand to fully explain the design challenges that had to be overcome to make the system perform the way the producer envisioned. The process of manually connecting or disconnecting the spans can be accomplished in about 15 minutes. By all accounts, the pivot has exceeded expectations and solved what was formerly a perplexing irrigation problem.

The group also visited another pivot-irrigated field – also with the capability of using either canal water or well water – near Johnson Lake. Central Valley Irrigation also provided the equipment and ingenuity to irrigate acres that previously were beyond the reach of a normal pivot. The answer in this instance was a double swing-arm pivot that bends in and out to cover hard-to-reach areas of the field.

Next, the group stopped at one of the sites along the E67 Canal system that has been equipped with telemetry equipment. Equipment was installed this spring to enable collection of data that will facilitate precision irrigation management to conserve water.

UHF radios, digitized flowmeters, rain gauges and solar panels have been installed at 26 sites (approximately 42 more turnouts will be equipped over the next two years). Real-time or near real-time data from those sites, along with data compiled at two automated weather stations in the E67 area, will be available to producers online to use with field evapotranspiration (ET) and water balances data to optimize water management and irrigation efficiency. Field data and graphs can be accessed on any device with an internet connection.

Partners in the E67 telemetry project include Central, McCrometer, the Nebraska Environmental Trust Fund, and University of Nebraska Cooperative Extension.

The group concluded the tour by visiting Central’s nearby Johnson No. 1 Hydroplant just below Johnson Lake. For many tour participants, it was the first opportunity to visit a hydroelectric facility, which was generating at nearly full capacity during the visit.

Other workshop attendees who were on the tour included: Rosemary Carroll, assistant research professor in hydrologic sciences at the Desert Research Institute in Reno, Nev.; Yusuke Kuwayama, Resources for the Future fellow, Washington, DC; Taro Mieno, assistant professor at the University of Nebraska-Lincoln; Mani Rouhi Rad, Ph.D. student at the University of Illinois at Urbana-Champaign; and Cameron Speir, an economist with the National Oceanic and Atmospheric Administration’s Southwest Fisheries Science Center in Santa Cruz, Calif.

Central extends special thanks to the gentlemen from Central Valley Irrigation for sharing their time and expertise; to Rachel Herpel for bringing the group to south-central Nebraska; to McCrometer’s Paul Tipling for helping to explain the telemetry project; and to producers Scott Ford, John Ford, and Willie Knoerzer (a member of Central’s board of directors) for taking the time to explain their innovative pivot operations to the group. 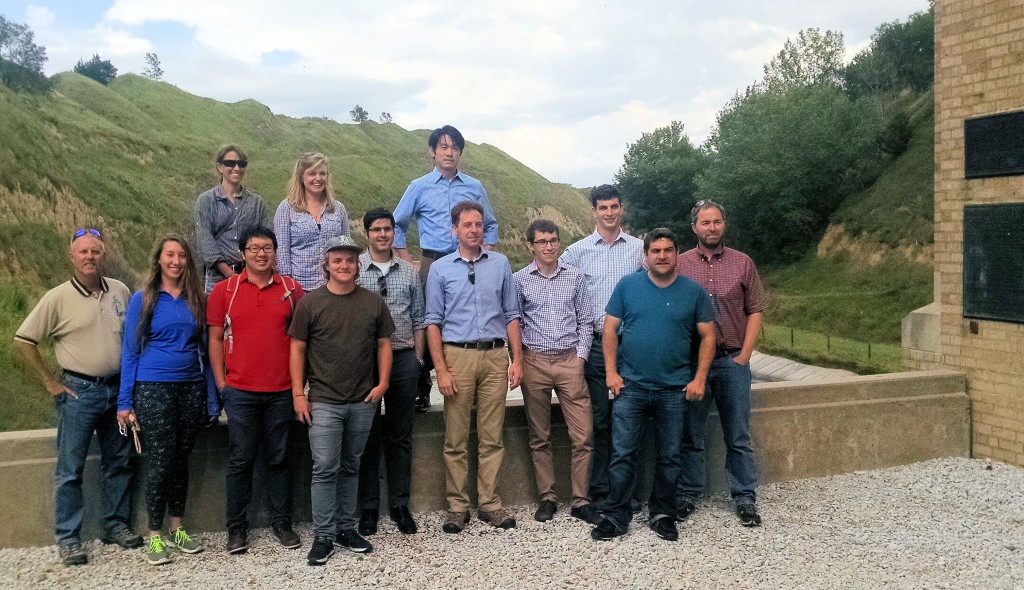