The Central Nebraska Public Power and Irrigation District had the great pleasure to host Class XI of the Leadership Nebraska program at Kingsley Dam/Lake McConaughy on Aug. 16, 2018.

Numbering around 25 people, the class learned about the construction, development and operation of the Central District while visiting the Nebraska Game and Parks Commission’s Visitors Center/Water Interpretive Center, as well as Lake McConaughy’s outlet structures and the Kingsley Hydroplant.

During the briefing about the District’s operations, the group learned that the annual economic impact of the Kingsley Dam/Lake McConaughy hydroelectric-irrigation project is estimated to be between $556 to $806 million (according to a study conducted by the U.S. Bureau of Reclamation as part of the development of the Platte River Recovery Implementation Program in the early 2000s).

The economic benefits were diverse and derived from irrigation for agriculture, recreational pursuits at Lake McConaughy and associated facilities, hydropower generation and power plant cooling water.

The class also listened to a presentation by Colby Johnson, NGPC’s regional park superintendent, about the economic and social impact at recreation at Lake McConaughy/Lake Ogallala as well as throughout Nebraska.

The product of planning committee formed by the Nebraska State Chamber of Commerce and Industry in 2005, the first class was assembled in 2007.  The program is geared toward people who have demonstrated community and professional leadership experiences and who desire to further develop their leadership skills and potential.

According to the Leadership Nebraska web site:

“Leadership Nebraska is a program designed for current and future Nebraska leaders to view the economic and political challenges and opportunities that face Nebraska.  (The program’s) mission is to identify, educate, communicate with, inspire and engage Nebraska’s current and emerging leaders for the well-being of the state of Nebraska.” 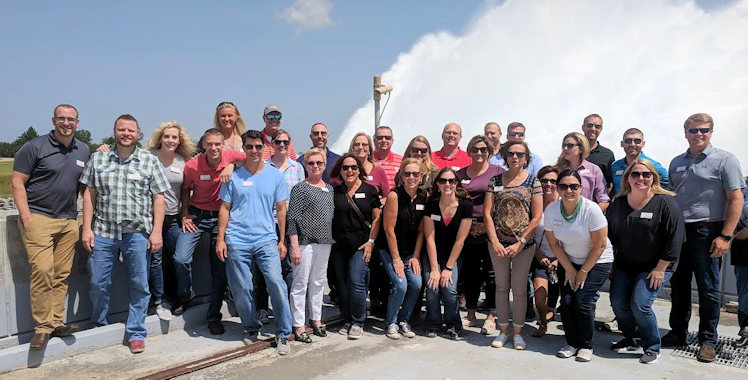 With the spray emitting from the bypass valve at Kingsley Hydroplant as a backdrop, Class XI poses for a group photo.

Class sessions are held in various parts of the state.  Each of the two-day sessions focuses on important issues in those areas and typically cover topics related to economic development, workforce development and education, agriculture and the environment, government and politics, and health and human services.

Central provided lunch to the class as part of the day’s activities.