We’ve all heard the phrase that starts out, “In the unlikely event of … (insert here your favorite disaster).”

When it comes to a failure of Kingsley Dam, one can probably CAPITALIZE, boldface and underline the “unlikely” part of the phrase, but nevertheless, The Central Nebraska Public Power and Irrigation District is prepared. It HAS to be. Kingsley Dam impounds the largest body of water in Nebraska and its failure would be catastrophic by any measure, but if the dam failed when Lake McConaughy was full, the resulting flood would affect the Platte River Valley all the way to the Missouri River.

To be clear, the chance of a dam failure is at the lower end of the “slim to none” scale, but because of the volume of water involved and the potential consequences downstream, nothing is left to chance.

In Gothenburg Division Manager Kevin Boyd’s words, “Kingsley Dam is safe, it’s big, it’s sturdy and there are a lot of redundancies built into our ability to evacuate water rapidly to avoid overtopping or breaching the dam. Plus, there are a lot of eyes on the dam; it is constantly monitored and frequently inspected.”

But Central is prepared for the “what if’s.” As Nebraskans in many of the state’s river basins have seen all too frequently in recent years, floods caused by excessive snowmelt runoff, precipitation events or a combination of factors are a fact of life.

As part of that preparation, Central conducts a functional exercise of its Emergency Action Plan (EAP) for Kingsley Dam every five years. The object of the exercise is to coordinate with each local, county, state and federal agency on responses to such an emergency. In addition to refreshing each agency’s familiarity with their response plans, it also provides an opportunity for the agencies to provide input about how the response plans might be improved or updated. 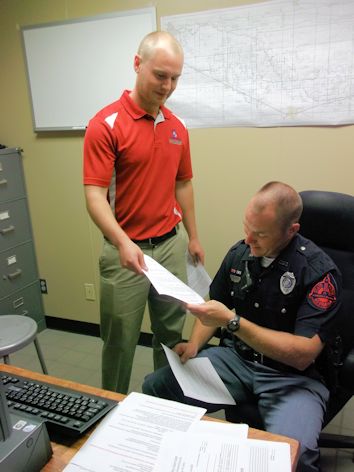 Central civil engineer Tyler Thulin, acting as a facilitator for the EAP, delivers a message to a member of the Nebraska State Patrol who was participating in the functional exercise.

During Central’s recent functional exercise, representatives from about 13 different agencies first went through a “table top” exercise where each agency outlined their planned responses in the event of an emergency. The scenario was then set for the functional exercise, which involved extremely high inflows into an already full reservoir, capped by several successive days of strong winds pushing high waves onto the dam. To provide a little realism, Central enlisted the assistance of KNOP-TV in North Platte to produce short videos containing simulated emergency broadcasts using their own on-camera reporters relaying details about the dam failure. The “broadcasts” were shown to the participants to set the stage for the functional exercise.

Participants were then dispersed throughout Central’s office in Gothenburg and the functional exercise was initiated, with messages among and between agencies flowing back and forth across the office phone system. “Facilitators” (Central employees) also helped the flow of information and communication by relaying “emergency messages” that required a response by a particular agency. For example, a message from a member of the public was given to the Nebraska State Patrol that reported a trapped motorist on a flooded road below the dam. The patrolmen on site then had to decide how they would respond given the limited ability to travel below the dam and the constraints upon available manpower.

The functional exercise simulates a dam failure or high-flow event in a stress-induced environment subject to time constraints on responses. It’s as close to reality as can be without actually mobilizing manpower and equipment. The exercise’s objectives include a determination of assets available from the various agencies, a test of how closely anticipated responses match reality, analysis of how the EAP can be improved, and providing an opportunity to improve cooperation among agencies.

In a high-inflow scenario that raises Lake McConaughy’s level to or near capacity, Central would follow an escalating set of conditions, starting with a “non-failure emergency” condition. If the situation is not resolved, Central would then enact the part of the EAP that alerts agencies about a “potentially hazardous situation developing.”

“One of the best options to save the dam that Central has is to increase releases through the “Morning Glory” spillway,” said Scott Airato, a senior civil engineer responsible for dam safety at the Federal Energy Regulatory Commission’s Chicago Regional Office. “Of course, if that becomes necessary to save the dam, the result will be significant flooding downstream.”

The next step – one that is hopefully never needed – would be implementation of responses to a dam breach or failure.

The FERC requires Central to consider every potential angle that might contribute to an event, from a sudden “sunny day” failure that starts with little flow in the river below the dam to a failure that occurs when there are already high flows in the Platte River downstream.