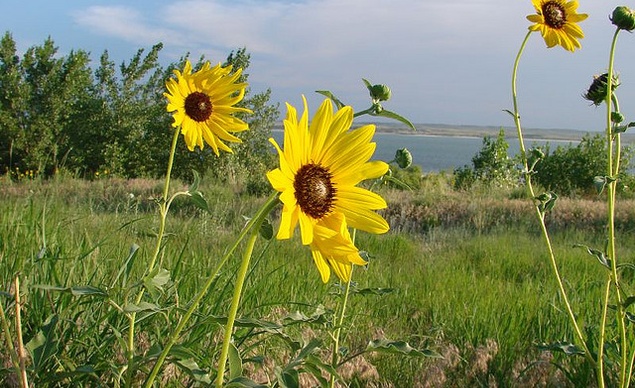 Budgettravel.com recently released a photo story about the top 27 places to go camping. Along with the expected beaches of various Caribbean islands, mountainous state parks, and foreign wonderlands lies Central’s very own beaches of Lake McConaughy, listed at number three. Click the link above to see it yourself! 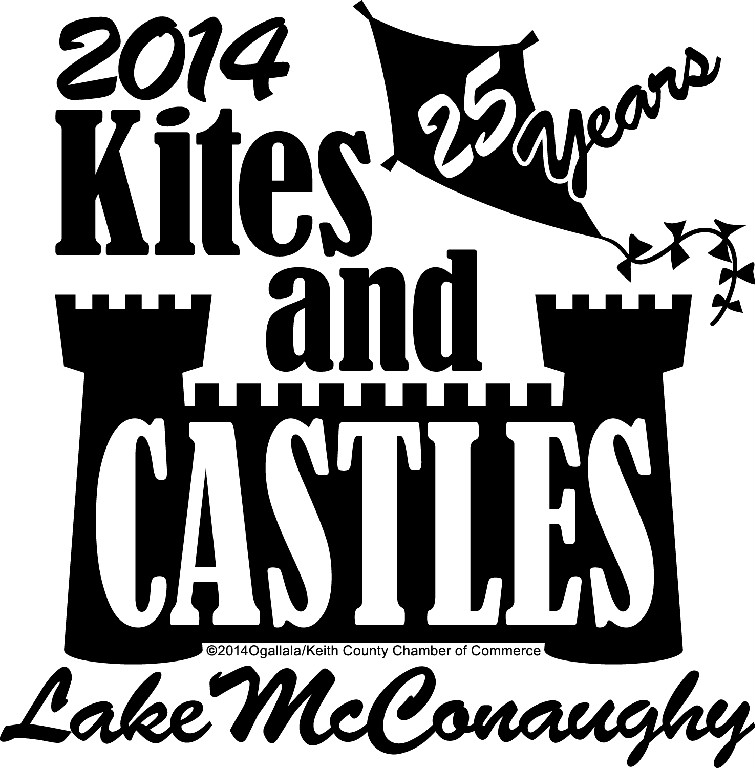 The 25th Annual Kites and Castles will be July 26, 2014 at Sandy Beach at Lake McConaughy! This event draws in a large crowd with lots of fun for everyone in the family. For a schedule of events, visit www.kitesandcastles.com. 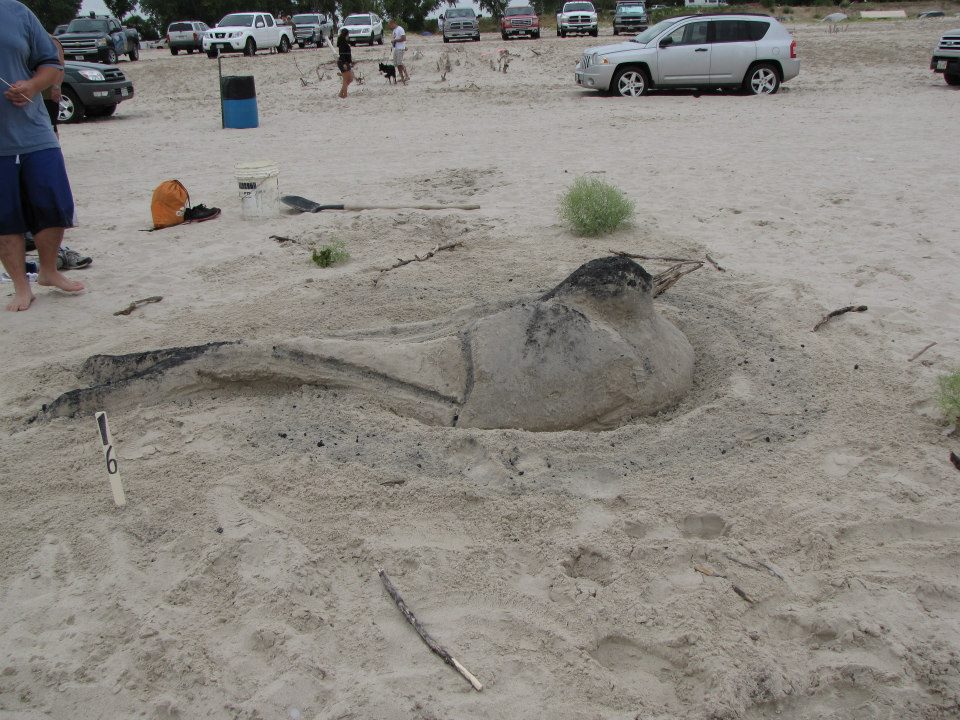 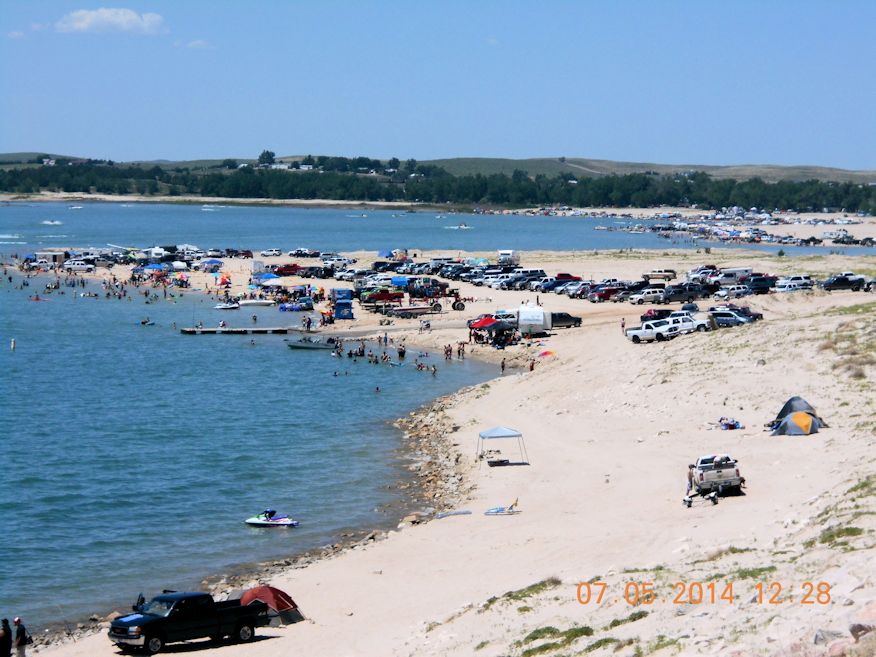 Crowds on beaches of Lake McConaughy. (Photo by Nate Nielsen)

The combination of almost perfect weather and a three-day weekend – not to mention the inviting water and beaches of Lake McConaughy – produced a record number of visitors to Central’s storage reservoir over the Fourth of July weekend.

The Nebraska Game and Parks Commission reported that 181,147 visitor-days were recorded for the July 4-6 weekend. The previous record was 142,446 in 2010 when July 4 fell on a Sunday. A visitor-day is one person per day, so if a person stayed for three days, that would result in a count of three visitor-days. Using those figures, an average of more than 60,000 people were at the Lake McConaughy/Lake Ogallala recreation areas each day.

The NGPC reported that all 325 camping pads in their modern campground were occupied. Nate Nielsen, Central’s foreman at Kingsley Dam, reported that the beaches and shorelines were lined with campers and tents, in some places four and five rows deep.

The Keith County News reported that businesses catering to lake visitors, including restaurants and convenience stores, were busy throughout the weekend with large, steady crowds of customers.

Law enforcement officials reported no serious problems, although the local sheriff’s office, the State Patrol and fire and rescue crews were extraordinarily busy responding to various emergencies, accidents, traffic issues, incidents, and complaints. All in all, though, a family-friendly atmosphere predominated and fun, recreation and relaxation ruled the weekend.

Nielsen also reported that the crowds of people did an excellent job of avoiding tern and plover nesting areas. Central personnel helped patrol the areas and reported no incidents of nest disturbances.

Johnson Lake near Lexington also drew large crowds. Larry Ossenkop, clerk of the Sanitation Improvement District at the lake, used water usage figures to provide an estimate of about 6,500 people at the homes, cabins and campgrounds over the weekend. Water levels were favorable, the weather was near perfect (although Sunday’s temperatures rose to somewhat steamy levels) and the lake was busy with watercraft of all shapes and sizes. 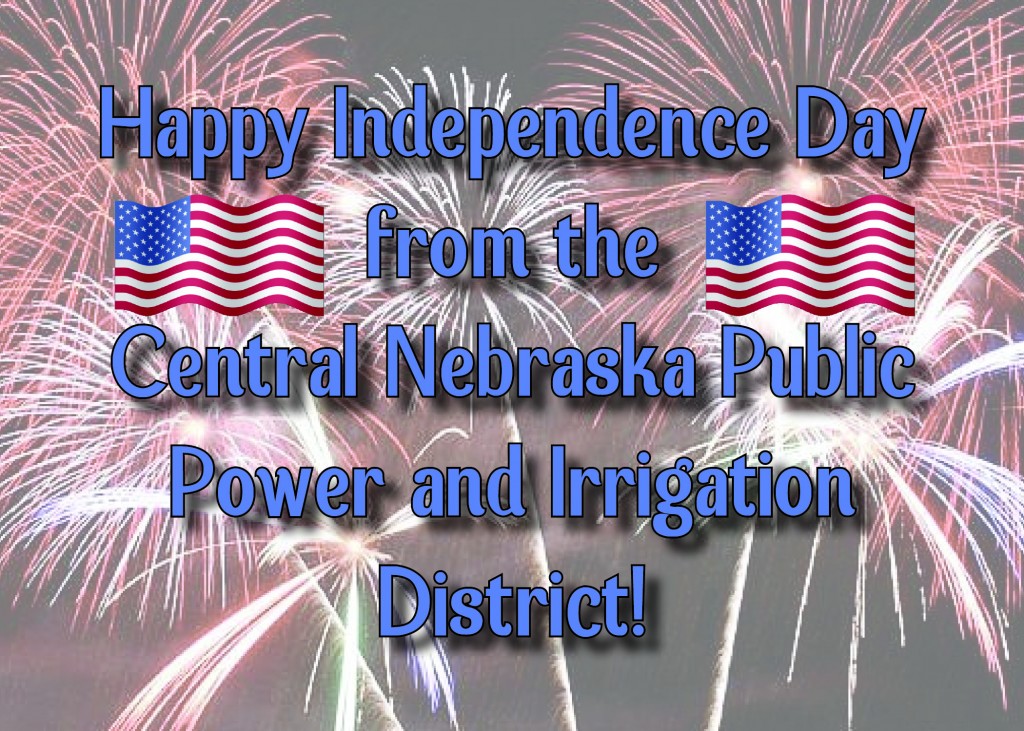 Fourth of July is a holiday many spend celebrating at the lake. This year, Johnson Lake events are being held on Saturday, July 5th. The day will begin with the annual boat parade 10:00 a.m. at LakeShore Marina boat docks. Sign up at LakeShore Marina C-Store from 8:00 am to 10:00 am. Immediately following the boat parade prizes will be given out.

There will also be a dock decorating contest on July 5th. Sign-up at LakeShore Marina from 8 a.m. – 12 p.m. Judging will take place in the afternoon from 2 to 4 p.m. with cash prizes. The night will conclude with a wonderful fireworks show on the lake.

As always, please use safety precautions when boating or participating in other lake activities at any lake this weekend.

Spring has been good to Lake McConaughy this year, both in terms of inflows and outflows: quite a bit of the former and not so much of the latter. Several factors combined to bring about these circumstances.

Entering May, there was little cause for optimism. During a period when inflows to Lake McConaughy historically begin to rise, inflows were relatively flat and hovering around 60% of normal. However, shortly after the U.S. Bureau of Reclamation began moving water from its larger upstream reservoirs down to Glendo Reservoir in preparation for releases to irrigation canals in eastern Wyoming and western Nebraska, the lower basin was hit with a series of heavy snowfall and precipitation events. The additional inflow pushed Glendo Reservoir into its flood pool and water was released down the North Platte River to make room for the extra water entering Glendo.

As a result, Lake McConaughy benefited from an unexpected spike in inflows that lasted from mid-May until the middle of June. Central’s main storage reservoir – thought to have peaked in early May – rose to a second peak near the end of June before inflows diminished, falling back below historic median flow rates.

At the same time, high flows in the South Platte River resulting from heavy snowmelt runoff and precipitation from spring thunderstorms entered Nebraska. For a period of several weeks, Central could hold water in Lake McConaughy and divert excess South Platte water into the Supply Canal to help fill the irrigation canals. Water in excess of amounts that could be diverted continued on down the Platte River, exceeding the U.S. Fish and Wildlife Service’s target flows for wildlife habitat purposes and allowing Central to divert excess flows into Elwood Reservoir for groundwater recharge purposes in both the Platte and Republican River basins. As of June 24, Elwood Reservoir’s elevation had gone up by more than eight feet.

Summer’s arrival (technically on June 21) means the beaches at Lake McConaughy are once again attracting crowds of visitors to enjoy the warm weather, swimming, camping and many other recreational pursuits. It also means the return of another group of visitors — piping plovers and interior least terns – two species of shorebirds that build nests and raise chicks on the beaches of Nebraska’s largest reservoir.

Piping plovers are a small (five to six inches long) sand-colored bird with a white breast and a single dark ring around the throat. Smaller than a robin, plovers have orange legs and an orange bill with a black tip. They are also recognizable by their “peep-lo” whistle, a sound beach-goers may hear before they can see the small and well camouflaged birds. Another characteristic that can aid in identification is the “broken wing” act the parent birds perform when an intruder nears their nests. The birds will feign injury, hoping to draw the intruder away from the nests and chicks. 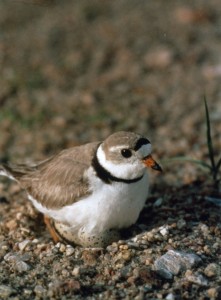 Like piping plovers, interior least terns build nests by scraping out a small bowl in the sand in which to lay eggs. Least terns are small (eight to nine inches) gray-white birds with black outer wing tips and yellow legs and bills. The tail is slightly forked and the head is capped with a black patch of feathers above a white forehead. Least terns are more aggressive in defense of their nests, diving at predators and often dropping excrement on anyone or anything that draws to close. 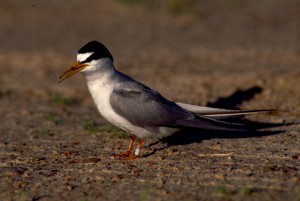 Piping plovers and least terns are already present and tending their nests, so it is once again time for Big Mac visitors to being the annual practice of “Sharing the Shoreline.” Although the nesting process is a little behind normal this year because of cool, damp conditions during the spring, the number of nests is expected to increase over the coming days. There are, as of June 11, five large enclosures in which a number of nests are located, two on the south shore and three on the north. Nests may also be located in other areas outside the existing enclosures. 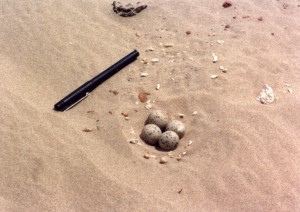 Predation and severe weather are the most common causes of nest and chick loss among the species, but human disturbance can also result in nest destruction. Central locates and marks the birds’ nesting areas, so if visitors see signs or temporary fencing that indicate the presence of the birds and their nests, please avoid those areas. Also, remember to keep pets on leashes at all times when on the beaches and campgrounds. Failure to do so is a violation of a Nebraska Game and Parks Commission regulation and – since plovers are listed as threatened species and terns as endangered species under the Endangered Species Act – disturbance of nests or birds can result in a fine, jail term, or impoundment of any vehicle used in a nest disturbance. The best action to take upon encountering a nest site is to AVOID IT COMPLETELY!

Please help protect the birds and preserve Lake McConaughy’s beaches as the outstanding place for outdoor recreation that they are by “SHARING THE SHORELINE!” 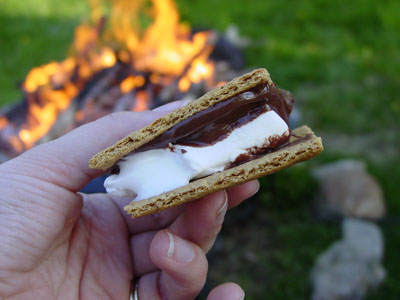 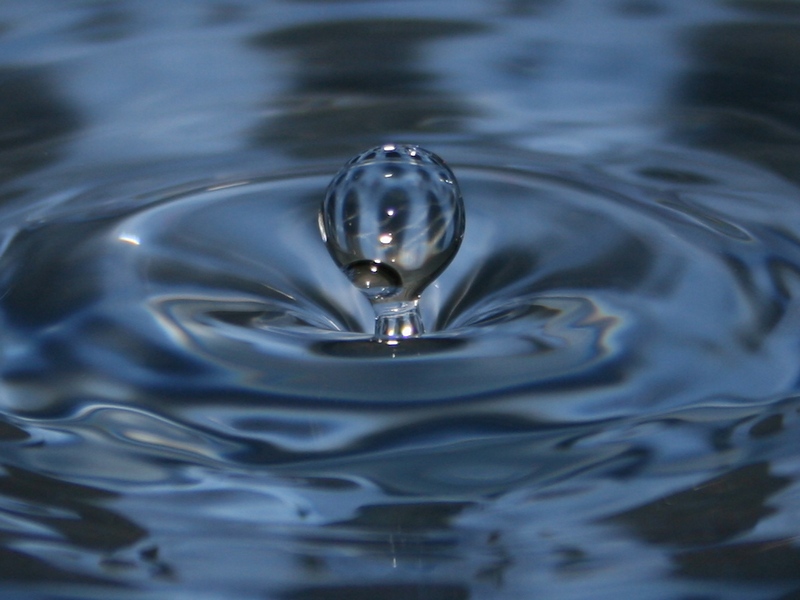 Spring moisture has improved somewhat from last year and we expect summer to follow suit however, nothing in the forecast is indicating “wet” summer conditions at this time.

Short of an epic rain event upstream of Lake McConaughy, Central irrigators will have a 9 acre-inch/acre water allocation in 2014. One-year delivery transfers have been allowed between farms and those transactions are complete. Groundwater transfers through Central’s canals will be allowed where possible and where approved by the Tri-Basin NRD.

A slow fill of the canals has begun with a combined flow of South Platte River water and our small, mandatory releases from McConaughy. Unless water supply conditions change substantially, water from the supply canal lakes, including Johnson Lake, must be used for the last irrigation to conserve water supply for the 2015 season in McConaughy.

There will be near 530 pivots, several new swing arms and 17 sub-surface drip systems on the Central system in 2014. Gated irrigation pipe is fast becoming a relic of the past. Central producers have made significant investments to stretch their water supply while increasing yield. Beyond the irrigation systems upgrades; precision equipment, no-till, strip-till, and field soil moisture and weather monitoring are becoming the norm. Our producers are definitely the A-team, bringing their game to 2014!

As of May 12th, Elwood Reservoir surface elevation is 2,583.8’ above MSL or 23.2’ below conservation pool. It will not be filled for irrigation this season but could possibly see summer gains if excess flows occur in the Platte River. Lake McConaughy surface elevation is 3,238.0’ or 27.0’ below conservation pool and is storing 1,043,000 acre-feet of water.

As summer nears and lake season gets in to full swing, please remember to use safety when boating!

Nebraska law requires any motorboat operator (including personal watercraft) born after December 31, 1985, complete a Boating Safety Course and be in possession of a course certificate when operating the boat.  You must be at least 14 years of age to operate a motorboat (including personal watercraft) in Nebraska.  Classes are offered throughout the state in two options ( A or B ).

For more information on Nebraska’s boating laws, or to find a boating safety course near you, visit Nebraska Game and Park’s boating website.