It was 1942.  Kingsley Dam had been closed the preceding year and Lake McConaughy was just beginning to fill.  In just under a year and a half, almost 840,000 acre-feet of water had been stored behind the dam.

This summer Central will reach a milestone:  75 years of delivering storage water from Lake McConaughy through its canal system.  In the irrigation service area (Gosper, Phelps and Kearney counties), farmers on almost 45,000 acres had signed contracts with Central for delivery of irrigation water.

Although Central had been bringing water to the area since the spring of 1938 from a temporary diversion point on the Platte River east of Lexington, the deliveries were limited to about 3,300 acres near the river and functioned mostly as an opportunity for area farmers to learn how to best utilize water on their fields.

Central sponsored demonstration days to show irrigation equipment and practices.  One such “irrigation school” of note was conducted on April 28-29, 1938 by Ivan Wood, an irrigation specialist from the University of Nebraska Agricultural College’s Extension Service.  Held at the Henry Peterson farm eight miles northwest of Holdrege, the school attracted an estimated 10,000 people over two days.  Wood demonstrated various instruments for leveling ground, making farm laterals, the use of canvas dams or light, steel dams for shutting off water or raising water levels in a lateral, the use of homemade lath box turnouts and how to distribute water over the field in the most practical manner. 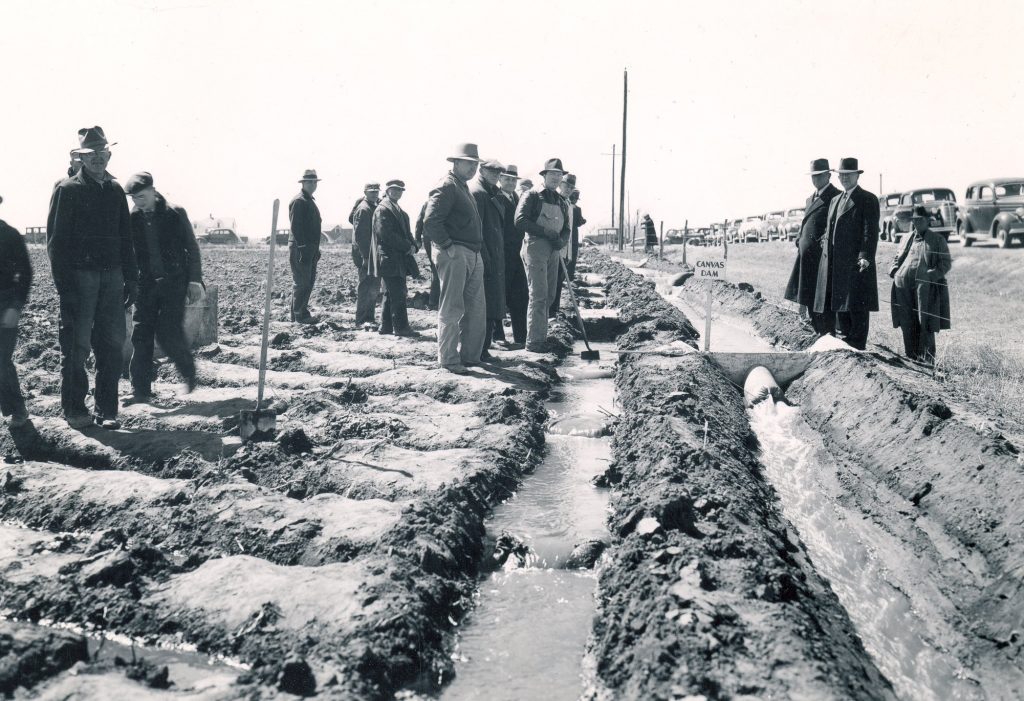 Irrigation demonstration: Central District customers learned how to best use the newly arrived irrigation water on their farms. The first “irrigation schools” were held in 1938 on Phelps County farms and continued through the early years of the canals’ operations.

Corn yields jumped from an average of 28 bu./acre in the 1920s to more than 100 bu./acre on irrigated ground under improved farming practices during the 1940s.  The ability to irrigate was probably the most significant factor in increasing yields and producing a crop every year, even during dry periods.

But in 1942, there remained some uncertainty about how beneficial – and necessary — these new canals would be.  Most of the area had received decent rainfall during May and June, but – as often happens in Nebraska — July and August turned out to be hot and dry.  The new irrigation canals bringing water to the area proved to be a blessing for those who had delivery service contracts with Central.  Success bred success and by the end of the decade, the number of acres under irrigation doubled as more producers saw the advantages of irrigation. 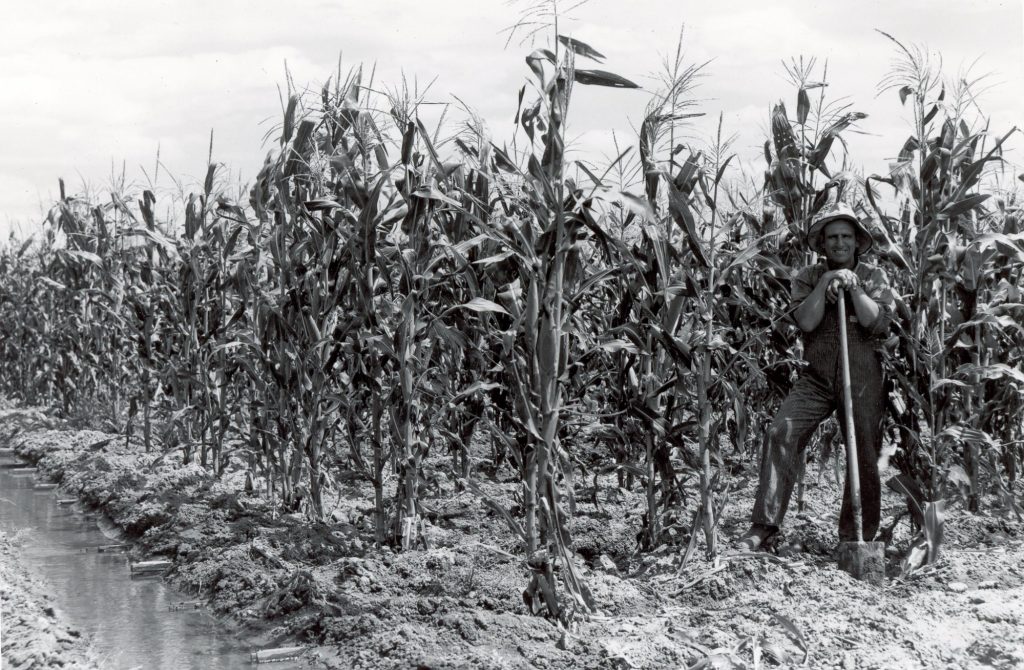 A Central irrigation customer stands next to his farm lateral — equipped with wooden lath boxes through which water flowed from farm lateral to furrow (lower left corner) — and smiles at the good fortune of being able to irrigate his crops.

One such farmer was Laverne Johnson, who had started farming in the 1930s, right in the middle of one of the most brutal droughts Nebraska has ever experienced.  Johnson, who years later would serve two terms on Central’s board of directors, had been a supporter of the irrigation project during the struggle to gain approval and funds to build the project.  But from his perspective, he didn’t know if the project would be built in time to save him from ruin.

In the early 1990s, he recalled the difficulties he experienced during his first years of farming and the elation of seeing irrigation water come to his farm.

He explained that he was nearing the breaking point in the late ‘30s, having experienced crop failures and poor harvests time and again because of the lack of rainfall.

“I was almost to the point that I had to start thinking about another way to make a living, because I was just hanging on by my fingernails,” he said.  “I was excited when I learned that the project had been approved and would soon be built, but I still didn’t know if I’d be able to keep farming long enough for the water to get to me.”

Then he emotionally recalled the moment after the canals had been completed and he first saw water making its way down to his fields.

“I just dropped to my knees,” he said, “and cried like a baby because I knew at that point everything was going to be all right.”

And it was.  Over the years, Johnson would expand his farming operation, putting the additional acres under irrigation from the canals and later from wells as the groundwater table beneath the area began to rise because of recharge from the canal system.

Laverne passed away in 2001, but today the farm that he thought he was going to lose remains in his family largely because of the reliable source of water in Lake McConaughy that enabled him, and many others like him, to prosper instead of being driven from the land by the whims of nature.

Students from the University of Nebraska-Kearney had the opportunity to expand their knowledge of Nebraska’s natural resources during a tour of The Central Nebraska Public Power and Irrigation District’s hydropower-irrigation project on May 29 and June 1.

It was the 15th annual UNK tour, a milestone that demonstrates a commitment by several individuals who have been of UNK’s Summer Student Research Program (SSRP) over the years, perhaps none moreso than John Falconer, director of the Office of Sponsored Programs. Falconer has organized UNK’s participation in the tour of Central’s project each year since the tour’s inception, including making the trek to Lincoln to transport canoes for a trip down Central’s Supply Canal (more about that later).

The SSRP supports independent student research and scholarly activity each summer. It is open to students from all disciplines, and is structured to enrich the educational experience in several ways.

First, SSRP enables students to engage in original research and creative activity under the guidance of a faculty mentor. This opportunity to work closely with an expert gives the student a chance to expand their knowledge of a chosen academic discipline. Also, because the research is independent of a structured classroom setting, students experience the excitement and challenges of applying their knowledge and skills to solve problems. Finally, students draw on their general studies coursework and learn about research in other disciplines, broadening their understanding of the differences and connections between various fields of study. 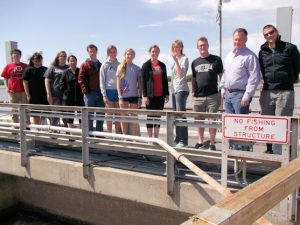 Students and faculty mentors pose for a photograph atop the headgates of the Supply Canal near North Platte.

The tour of Central’s project provided students – most of whom had no background in agriculture or natural resources – a first-hand look at how water resources provide multiple benefits to Nebraska. The tour stopped at several sites and facilities within the District to see examples of these benefits.

The students first visited a site where irrigation water is applied to fields through a sub-surface drip system. The water is diverted from a small irrigation lateral through a filter system and then through buried drip lines to the crop’s root system. SDI irrigation is extremely efficient in that it reduces evaporation and deep percolation losses that may be present with other irrigation methods. Nitrogen fertilizer can also be applied through the system, literally spoon-feeding nutrients to the growing crop during the irrigation process. Producers employing SDI systems regularly see equal or better yields from SDI acres as compared to pivot-irrigated fields with generally less application of water. 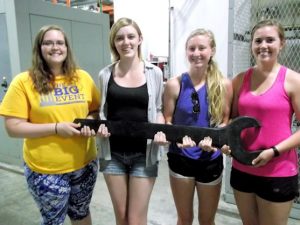 Four to a wrench: Young ladies from the UNK Summer Student Research Program hoist one of the wrenches on hand for maintenance at the Kingsley Hydroplant. And it’s not even the biggest wrench!

The group also examined (briefly, because of a passing rain shower!) an example of “outside-the-box” thinking during a stop at a “drop-span” pivot system. The pivot, which can use either water from Central’s canal system, or from an irrigation well, is located on a half-section that includes obstacles that prevent the pivot from reaching a portion of the field. The solution, implemented by the producer and a local pivot dealer, was to install a pivot that allowed the producer to disconnect spans and towers to allow the pivot to reach more than 30 acres that were previously unable to be covered by the pivot. The pivot then reverses, stops at the location where the spans were dropped off, picks up the disconnected spans (with minimal labor by the producer), and continues over the rest of the field.

The group also stopped at a site that is part of the E67 Telemetry Project. The E67 Canal system includes three miles of membrane-lined canal; the rest of the delivery system was converted from open laterals to buried pipelines several years ago. Each turnout in the E67 area (approximately 6,000 acres) is equipped with UHF radio transmitters, digital flowmeters and rain gauges powered by and solar panels. Two automated weather stations measure wind speed and direction, temperature, relative humidity, net solar radiation, and precipitation to calculate evapotranspiration rates of the crops.

The data is transmitted to a base station at the nearby Johnson No. 1 Hydroplant and then via the internet to a McCrometer server where sorting and calculations are done. Field data and graphs can be picked up online by a producer’s PC, tablet or smartphone that has internet access.

The data allows precision irrigation management of these fields which saves water. Producers can start each morning with an up-to date view of graphs that show their field water balances. The information allows the producer to know where and when they need to start irrigating. Additionally, in a rain event, they will know total rainfall for the day, accumulated every 15 minutes on each field (or a nearby one) and know which irrigation systems can be shut down immediately or if they should keep running through a small rain event. There should never be water stress on a field again.

Additional components are available and producers have the option to add such equipment as pressure gauges, soil moisture probes, pivot lateral position, etc. The E67 Telemetry Project came about as a cooperative venture by Central, McCrometer, UNL Extension and the Nebraska Environmental Trust Fund.

From there, the group journeyed to the Jeffrey Island wildlife habitat area, a 4,000-acre area owned and managed by Central for the benefit of wildlife. Dave Zorn, Central’s senior biologist, explained the management process and how Central has worked over the years to convert pastureland beset by musk thistle and other noxious weeds into suitable habitat for various species of birds, reptiles, amphibians and mammals.

The next stop was at the Gothenburg Control Center, where Gothenburg Division Manager Devin Brundage explained how the vast system is remotely and automatically operated from the Control Center, moving water almost 200 miles through a series of canals, lakes, pump stations, pipelines and hydroplants from Lake McConaughy to east of Minden.

The students then stopped at the Jeffrey Hydroplant near Brady to learn about the clean, renewable generation of electricity at one of the four hydroplants on Central’s system.

After a delicious catered dinner at Jeffrey Lodge, the students spent the night at the lodge to rest up for a second full day of exploration, education, and physical exertion. 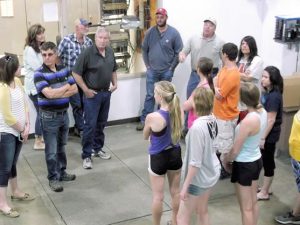 After lunch, the group set out for their final stop, a point just below Midway Lake, to conclude the tour with a 5.5-mile canoe trip down the Supply Canal to the Gallagher Canyon Lake State Recreation Area. For many, it was their first opportunity to paddle a canoe and, despite some inexperience and subsequent sore muscles, the trip was completed in less than two hours. 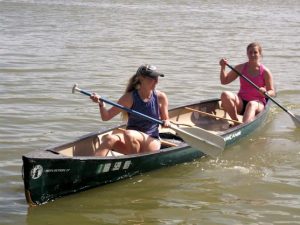 We made it! Two UNK students reach the boat ramp at Gallagher Canyon State Recreation Area after a 5.5-mile canoe trip down the Supply Canal.