With the summer months approaching, Central would like to provide a reminder about operations at Johnson Lake, specifically the requirement to adhere to a plan to protect nesting habitat for two threatened/endangered avian species along the Platte River.

The Flow Attenuation Plan, or “Spike-Flow Plan” (Plan), was developed several years ago with input from the U.S. Fish and Wildlife Service and the Nebraska Game and Parks Commission. It is intended to help attenuate (reduce) flows on the Platte River below the Overton measuring gauge during the least tern and piping plover nesting seasons.

To have 2,500 acre-feet of space in Johnson Lake to hold rain and rejected irrigation water, the lake must be kept at the lower end of normal levels. From June 1 to Aug. 15 each year, Johnson Lake will be operated near the low end of the normal operation range (see Johnson Lake Elevation Graph) so that space is available if attenuation is required. When attenuating flows, Johnson Lake levels will increase until the water is released to the river at low flows or diverted to the irrigation canals. The water levels will then decline to the lower end of the operating range in preparation for another attenuation event.

Another group of students from the Nebraska College of Technical Agriculture in Curtis recently visited Kingsley Dam and Lake McConaughy.

Brad Ramsdale, PhD, professor of agronomy at NCTA, accompanied the students as he has several times in the past.

The group first listened to a presentation by Nate Nielsen, Central’s Kingsley Dam foreman, about Central’s hydro-irrigation project before the group visited the Nebraska Game and Parks Commission’s Water Interpretive Center where they learned about the various uses and importance of water.

After viewing a video that detailed the construction of Kingsley Dam and a five-minute audio presentation about water resources in the Platte River Basin, the group headed out to get a first-hand look at the “Morning Glory” spillway and the Control Tower, the outlet structures for Kingsley Dam. The group also toured the Kingsley Hydroplant where Nielsen described in detail the operation of the state’s largest hydroelectric plant. 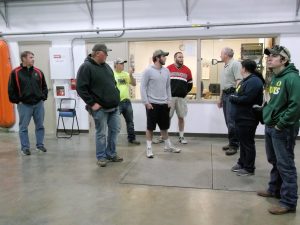 After leaving Lake McConaughy, the students stopped at Paxton to observe the “Big Cut” through the hills north of the town and NPPD’s siphon that conveys water from the North Platte River into the South Platte basin.  The group then enjoyed lunch at Ole’s Big Game Bar and Restaurant.

The day concluded with a stop at Central’s Gothenburg Control Center where Gothenburg Division Manager Devin Brundage briefed the group on the operation of Central’s supervisory control and data acquisition system (SCADA) that controls and monitors flows in the Supply Canal and irrigation canals, generation at four hydroplants, and many other aspects of Central’s hydro-irrigation project.

Central thanks the group for visiting and looks forward to future visits by Dr. Ramsdale’s students.