By now, everyone knows this spring was, well, on the wet side. While rainfall during May in Central’s irrigated area was only slightly above average (Central’s gauge in Holdrege collected about 2.3 inches, about 104 percent of normal), that followed an April during which more than nine inches of rain fell across most of the area and even higher localized totals were reported from some rain gauge sites.

But what happened in south-central Nebraska pales in comparison to what was (and is) occurring in the western part of the Platte River Basin.

The 2015-16 water year (Oct. 1 to Sept. 30) started off in a fairly innocuous manner. Inflows to Lake McConaughy in October, November and December were very close to normal. The new year started with more of the same. The first four months brought inflows that ranged between 75,000 acre-feet and 79,000 acre-feet, again only slightly above historical median, or normal, inflows.

The pattern changed in May. Inflows to Lake McConaughy during April had lagged below normal until the last day of the month when they finally climbed to 1,876 cubic feet per second (cfs), about 350 cfs higher than normal. Over the next 31 days, the faucet was open all the way. The daily average inflow during that period was 6,394 cfs, far exceeding the normal daily average of 1,729 cfs. At May’s end, more than 393,000 acre-feet had flowed into Lake McConaughy, almost six times the amount (69,252 a-f) that normally arrives at the reservoir during the month, and certainly more than was projected. In fact, inflows during May were the fifth highest on record. (See table.)

May inflows peaked at 8,564 cfs on the last day of the month, then clicked up a notch to 8,716 cfs on the first day of June, which is the highest daily inflow since June 20, 2011 when the river gauge at Lewellen hit 9,000 cfs. So far this month, inflows have been steadily declining (inflows were at 6,750 cfs on the day this was written, still more than three times the normal rate, but declining nevertheless), which was actually welcome news as Lake McConaughy was nearing its maximum storage elevation.

As March began, snowpack in the upper and lower North Platte River basins and the South Platte was near normal. Inflows to Lake McConaughy, as stated above were at or slightly below normal. Reservoir storage in the U.S. Bureau of Reclamation’s North Platte River reservoirs was also near normal for the time of year.

The picture looked pretty much the same when April arrived, nothing to get too excited about. Snowpack accumulation in the upper North Platte Basin was at 101 percent of normal; while the lower basin (which typically provides less runoff than the upper basin) was at 121 percent. Experts were expecting “good” runoff, but not quite the volume of water that would show up in the Platte Basin during May.

Heavy snow fell in the Rocky Mountains; at lower elevations and rainfall came in quantities that were well above normal. Conditions rapidly changed; what was setting up to be a “good” year for inflows suddenly turned to exceptional.

Water managers with the Bureau of Reclamation started releases from Glendo Reservoir in early May to make room for expected high inflows, but despite the early releases, storage behind Glendo Dam soon reached the flood pool level. Glendo is the only reservoir in the North Platte Basin with a designated flood pool, which can hold about 300,000 acre-feet. As June began, there was still about 200,000 a-f of flood pool space remaining and water being held in the reservoir helped reduce the high flows crossing into Nebraska.

In summary, late spring rains – which are typical, but not in the quantity that ended up falling — and the late beginning to the spring snowmelt in the mountains because of cooler than normal temperatures combined to produce the volume of water now in the rivers.

To complicate matters, snowmelt is also just beginning in the South Platte Basin. Flows in the South Platte recently had been running well above normal before falling off to near normal. However, a lot of snow remains to melt from the higher elevations and there is little room for storage in Colorado’s off-stream reservoirs.

While flows in the South Platte are currently well below flood stage, that might change, depending upon how fast the snow melts and how much precipitation falls in the valley over the next few weeks.

With temperatures on the rise, demand for irrigation water will soon increase up and down the Platte River Valley, which will take some of the water out of the river. But it’s probably safe to assume that there will be higher than normal flows in the Platte Basin for much of the summer.

Producers taking water from Central’s E67 Pipeline Canal are involved in our newest precision management pilot project; funded in part by Nebraska lottery dollars through the Nebraska Environmental Trust, McCrometer Inc., Central and Nebraska Extension.  McCrometer’s Steve Grove (Hemet, CA) and Paul Tipling (Salina, KS), came to NE last week to help Central staff install equipment at 25 new field sites.  These sites, added to the 2015 installations, bring total sites in the project to 51.  In addition, a third McCrometer weather station was set up next to an existing UNL station to compare measured weather data and the results of the evapotranspiration calculations from each unit. 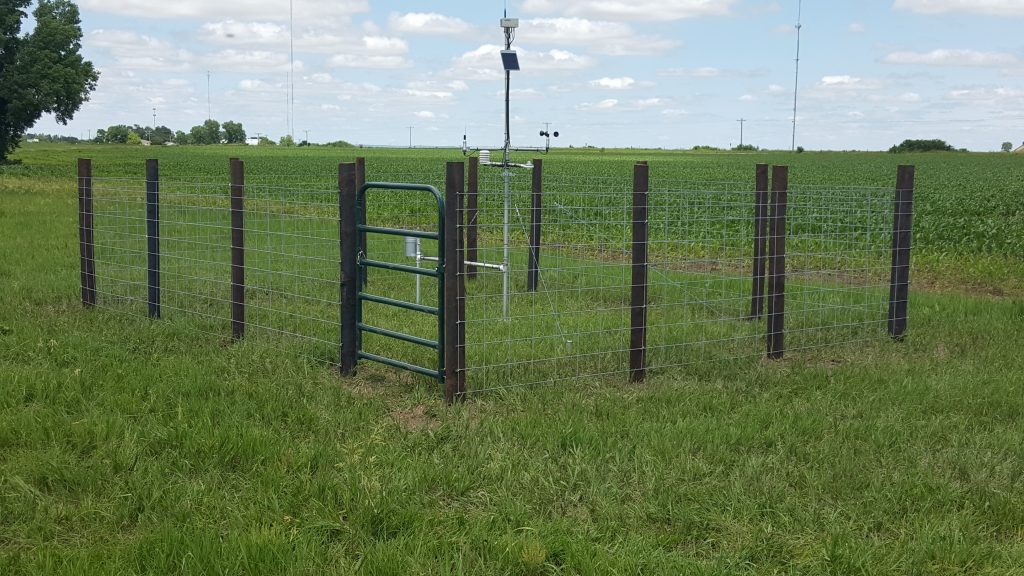 Each project site using water from E67 has been fitted with a UHF radio/solar panel set and a digitizer added to the existing flowmeter.  Most sites have a digital rain gauge unless pivot water will hit it.  A gateway unit at the powerhouse near Johnson Lake calls each field station every hour and each weather station every 15 minutes to gather data and transmit it to a host computer at McCrometer.  Producers have access to this information from each of their fields and the weather stations immediately from a home computer, tablet or smartphone.  Data is graphed, tabled and archived for producers and all data is exportable to an Excel spreadsheet. 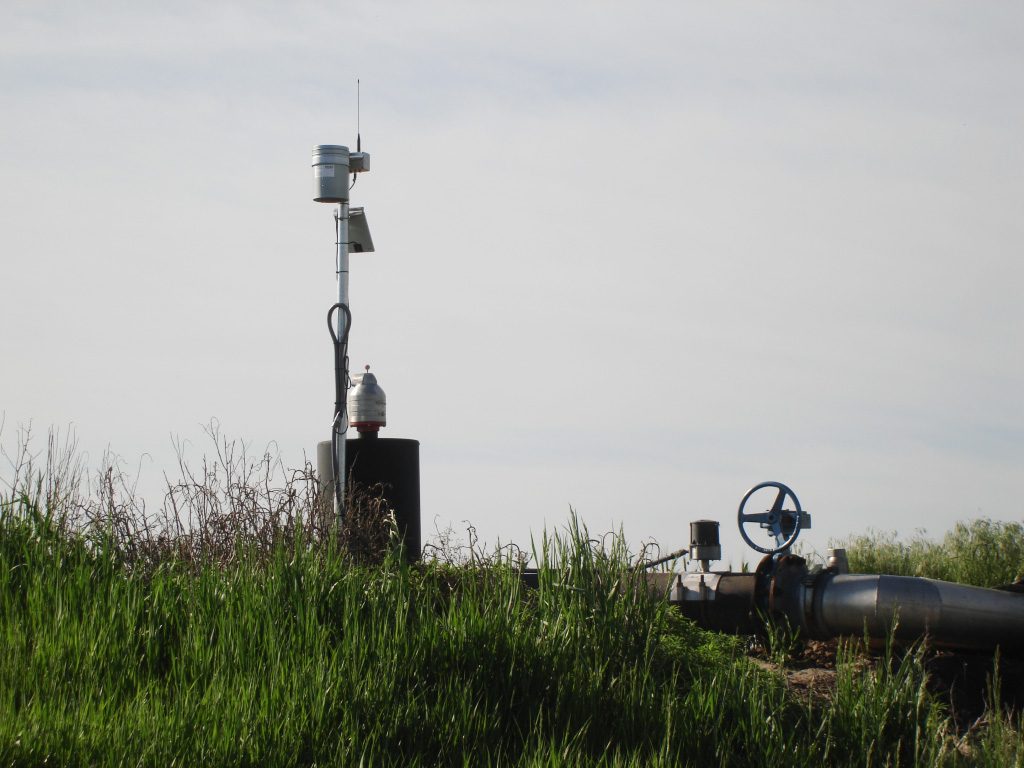 The outcome of precision management is expected to be high yields with minimum use of irrigation water.  It is possible that an irrigation event can be saved at the beginning or end of the season or both once the producer has reliable information on hand to make those decisions.